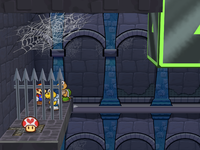 Koopook, whose skill at hiding has earned him the title of The Hide 'n' Seek Koopa, is a Koopa Troopa that is hidden somewhere in Hooktail Castle during the events of Paper Mario: The Thousand-Year Door. Mario must accept his trouble first at the Trouble Center. In order to find Koopook, the player must direct Mario and partners to the leftmost end of the last bridged room before Hooktail Castle begins leading to its tallest tower and jump off, landing on a barred platform where Koopook awaits. Once found, Koopook will reward Mario. He will also mention his relationship to Koops; the two were once apparently neighbors and playmates when they were "barely shell-high".

The reward for finding Koopook is a Special Card that allows Mario to play the Plane Game at the Pianta Parlor. Later on in the game, Mario will get an e-mail from Koopook saying he has hidden in a different spot and is willing for Mario to attempt at finding him again. He says he will give Mario another reward if he does so. However, this is not possible as Koopook is hiding in Goomstar Temple, which is actually a mistranslation of the Crystal Palace. Koopook has apparently had a hide and seek obsession ever since he was very young and was one day never found during a game of hide and seek– That day, apparently, was the day he decided to become the Hide 'n' Seek Koopa and hide and sneak his way through life.

What's up, Koops? After you found me Koops, I found a nice hiding nook at a place called Goomstar Temple. It's so cold my shell is frosty, but it's a great place for hiding.

Obviously, I don't want anyone to find me, but... The thing is, I DO want people to see how good I am at hiding, You see the bind I'm in?

Anyway, spread the word! Come find the wandering Hide-n-Seek Koopa! See ya later... Or not!

Goombella can use Tattle on Koopook only when Mario finds him in Hooktail Castle while taking on his trouble but before Mario talks to Koopook.