“And then I, Grodus, will build a new world! A perfect, ideal world... Yes. A world made by me, about me, and for me! GAAACK ACK ACK ACK ACK!”
—Sir Grodus, Paper Mario: The Thousand-Year Door

Sir Grodus (or simply Grodus) is the supreme leader of the organization called the X-Nauts and one of the main antagonists of Paper Mario: The Thousand-Year Door. The organization consists of X-Nauts, a band of thugs determined to capture the Crystal Stars before Mario so they can dominate the world with the treasure behind the Thousand-Year Door.

Prior to the start of Paper Mario: The Thousand-Year Door, Grodus learns of the Shadow Queen buried beneath Rogueport from the Shadow Sirens. Grodus soon begins his plans to find the Crystal Stars and use them to revive the Queen in order to conquer the world. He learns the location of three of the Crystal Stars (Hooktail's Castle, the Great Tree, and Rogueport Sewers), and the Shadow Sirens inform him that a "pure maiden" is needed as a host for the Queen. The X-Naut organization eventually comes into possession of the Magic Map's treasure chest, though Grodus was unable to open it. He then decides to use the chest as a way of finding the pure maiden, since only a pure person can open it.

By the time the story starts, Grodus has obtained the Crystal Star found in the Rogueport Sewers, which ends up under tight security in the Fortress on the Moon. With this in hand, Grodus sends the Shadow Sirens to find a pure maiden for his plans. At Rogueport, Beldam eventually finds Princess Peach, a suitable candidate to be the maiden, but since there were too many witnesses for her to kidnap Peach, Grodus loses his patience and sends some X-Nauts to abduct her themselves. After Grodus is given Peach, he is annoyed to find that Peach does not have the map, having already sent it to Mario. Hoping to gather more information on the Crystal Stars, he sends Lord Crump back to Rogueport. 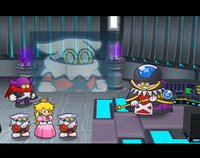 After failing to acquire any more information on the Crystal Stars, Lord Crump reports back to Sir Grodus, who began setting his plans in order. Grodus' first appearance is when he's interrogating the princess about the whereabouts of the map. Peach accidentally reveals that Mario is the one who's going after the Stars, letting him know that he has the Map. Afterwards, Grodus sends Lord Crump to the Great Tree to speed up the search, and sends the Shadow Sirens to steal the map from Mario. Mario, however, is able to defeat both of them, infuriating Grodus. After Mario successfully obtains the third Crystal Star, Grodus calls the Shadow Sirens once again to stop Mario, though this plan ended miserably.

At the Fortress, Grodus instructs TEC-XX, who he designed to be the "perfect computer", to keep an eye on Peach, but TEC ends up becoming infatuated with Peach and helping her foil Grodus' plans. He continues to send his minions out to stop Mario, such as Lord Crump to Keelhaul Key and Doopliss to the Excess Express, though they are always stopped due to Mario's intervention. As his plans continue to fail, Peach and TEC obtain Grodus' data disk that outlines all the aspects of his plans. With the disk, TEC is able to ultimately prepare for Peach to escape.

Grodus eventually finds out that TEC has been letting Peach in and out of her cell and has been hacking into other files that he was forbidden to go into. He shuts down TEC just as TEC prepared to let Peach escape and then takes her to the Thousand-Year Door, leaving the Fortress and the final Crystal Star under the command of Lord Crump. However, Grodus planned for Crump's eventual defeat, forgetting about sending his minions after Mario and his team to steal the other Stars from him and knowing that he could trick the heroes into opening the Thousand-Year Door for him. While Mario and his team attack the fortress, Grodus had Doopliss abduct Professor Frankly and disguise himself as the professor, using the guise to convince Mario to open the door. Once it was open, Grodus enters and waits patiently for Mario in the Palace of Shadow's throne room.

After Mario confronts Grodus at the Palace, he reveals he tricked Mario into collecting the Crystal Stars to open the Thousand-Year Door. Grodus then engages Mario in battle, using various forms of magic and technology to aid him, though he ends up badly weakened. Not accepting defeat, he reveals Princess Peach imprisoned in a compact force field, threatening her life if Mario refuses to surrender. As Mario stands motionless, Grodus attempts to attack him, but the ceiling comes crashing down on him, being crushed by Bowser and Kammy Koopa who fall through the ceiling.

While Mario fights Bowser and Kammy, Grodus escapes to the resting place of the Shadow Queen with Peach. Once Mario defeats Bowser and Kammy, he goes down to the Queen's resting place, where Grodus is waiting. Declaring himself as the new ruler of the world, Grodus summons the Shadow Queen, presenting Peach as a vessel for the Queen's spirit. Unfortunately, when Grodus tries to order the Shadow Queen to destroy Mario, the Shadow Queen does not obey and blasts him, destroying his body and leaving him as merely a head. The Queen attacks him again, apparently finishing him. The Shadow Sirens then appear to explain that they tricked Grodus into thinking that he could control the Queen in order to revive her.

In the game’s epilogue (narrated by Goombella), Grodus is revealed to still be alive, residing in Poshley Heights alongside Lord Crump and some X-Nauts, and has reportedly changed for the better. How Grodus managed to survive remains unexplained.

In Super Paper Mario, a novelist in Flopside wrote the script for the TV Show The Grodus Chronicles (a pun on "The Martian Chronicles"), apparently featuring Sir Grodus. The boss Francis is a fan of the show.

While nothing is known about his past, Sir Grodus is presented as a serious villain who wants to rule the world. Grodus is willing to do whatever it takes to accomplish his plans.

Despite being outwardly calm on most occasions, Grodus's desires often drive him to appear insane, laughing evilly. Grodus is often seen giving orders to his organization, seeing most of them as inferiors. He is shown to be very uptight throughout the course of the game, but becomes more calm towards his associates when he gets closer to unleashing the Shadow Queen.

Grodus does not care about much other than himself. This is shown when Grodus does not tell Lord Crump about his plans of Mario defeating him. Grodus also shows a dislike for disobedience, as he demonstrated when he attempted to command the Shadow Queen. Grodus also sees Mario’s relationship with Peach as a weakness.

Along with typical villain traits, Grodus is also shown to be highly intelligent and skilled at technology. His technology goes as far as manipulating magic. Grodus also always thinks ahead and is never willing to admit defeat. He always has backup plans in case his original plans fail. He is also very cunning and is always prepared for an attack, as seen by the puzzles and traps he sets up in his base.

Grodus’s main fault is his overconfidence. He underestimated Mario’s abilities, especially in his battle with him. Grodus’s arrogance led to his ultimate defeat in which he attempted to command the Shadow Queen. This mistake led to the Shadow Queen almost killing him. Grodus remains alive as a head only. 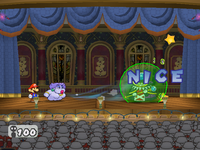 “Meet your ends, you meddlesome fools! You will know my power!”
—Sir Grodus, Paper Mario: The Thousand-Year Door

Sir Grodus can create Mini-Yuxes called Grodus X's. However, unlike the Yux family, he requires 4 Grodus Xs to create a force field to protect himself. If a single Grodus X is destroyed, the force field breaks. However, Grodus's Defense is increased by 1 for every Grodus X that he has. Grodus is also very adept at magic, using his scepter to conduct it. Using the scepter, Grodus is capable of casting lightning, setting fire to his enemies, and freezing them. His scepter is susceptible to being stunned after being attacked, preventing him from attacking for a while.