“Are all of you ready? And you there! In front of the TV! You listen up, too!”
—Professor Frankly, Paper Mario: The Thousand-Year Door 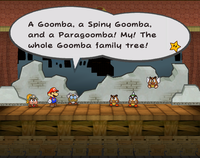 Professor Frankly is Goombella's and Kolorado's old teacher at U Goom in the game Paper Mario: The Thousand-Year Door. He is an elderly Goomba with grayish brown puffs of hair and eyebrows and wears thick glasses, as indicated by the swirls in the glass, which is a common motif used in Japanese media (other Mario characters with swirled glasses include Toadies, Professor Elvin Gadd, Iggy Koopa, Fawful and Francis). Professor Frankly is one of two known Goombas to have square teeth rather than pointed teeth, the other being Goombario. Frankly's name is derived from the qualifier "frankly", a word commonly used by intellectuals to emphasize the truthfulness of what they are about to say. 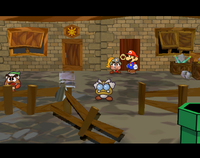 Professor Frankly opening up the gate to Rogueport Sewers.

Mario first meets Professor Frankly after he rescues Goombella from a gang of X-Nauts who are attacking her. When Mario and Goombella arrive at the professor's house, Goombella tells him that they need his help to study the legendary treasure of Rogueport. After learning that Mario possesses the Magical Map, he takes the pair to the Thousand-Year Door. When the group leaves his house, the professor removes a rotten piece of a fence blocking a green Warp Pipe leading to the Rogueport Sewers. Before they enter, the professor asks Mario if they know about the battle system and the Action Commands, where the player has the option to learn about them in a tutorial.

When Mario, Goombella, and Frankly visit the Thousand-Year Door for the first time, the Magical Map in Mario's hands indicate the location of the first Crystal Star inside Hooktail Castle in Petal Meadows. Frankly mentioned that he met Princess Peach, when she was on a journey of her own and he also mentions another "strange group" is doing the same. Each of Mario and his partners' subsequent visit to the Thousand-Year Door to use the Crystal Star they collected to uncover the location of the next Crystal Star is immediately followed by their visit to the professor and study it out. Before Goombella and Mario starts their quest, Frankly gives him the Power Smash badge, and serving a tutorial on how to equip and use badges on the pause menu. During each visit, Frankly, who is making progress in his research about the ancient city that preceded Rogueport as well as an ancient demon that plunged that city into darkness, talks about the latest e-mail from Princess Peach (that Mario receives after each chapter) and tells Mario and his partners the exact location of the Crystal Star they must collect next. In addition, tattle log entries that the player may have missed can be found in Frankly's bin. On the back shelf of his house, a miniature version of the head-shaped rocks at the entrance to Pirate's Grotto can be seen, as well as spherical objects bearing the Sun, Moon, Star and Puni designs seen in the Great Tree.

After Mario and co. obtain the final Crystal Star from the X-Naut Fortress on the Moon, the Shadow Sirens abduct Frankly, knock him unconscious, and then locked him up in a closet. Doopliss takes the guise of the professor in order to trick Mario into opening the Thousand-Year Door so Sir Grodus can enter the Palace of Shadow. Frankly later escapes and gives chase into the palace. After the Shadow Queen is awakened and possesses Princess Peach, the real Frankly is seen in one of the palace's darkened rooms, distressed at the thought of her revival. Following the Shadow Queen's defeat, he reunites with Mario and co. and reveals his discovery of a large treasure chest containing the true treasure. When Mario visits him post-game, Frankly reveals the contents of this chest to be a seemingly insignificant Dried Shroom; however, Frankly is excited nonetheless by it, as it proves that residents of the ancient city ate Mushrooms.

An attached image of Frankly in his e-mail to Mario

Hello Mario! Working hard? Professor Frankly here, in e-form!
It’s highly likely you’ll receive e-mails like this one while you’re on your journey, so check your mail often!
I actually have nothing more to say than that so I hope all goes well for you, and I look forward to getting more information on those Crystal Stars!

Artwork of Frankly, from a Nintendo Power subscription leaflet bundled with some late GameCube games.
Retrieved from "https://www.mariowiki.com/index.php?title=Professor_Frankly&oldid=3638633"
Categories: