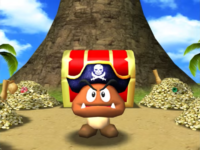 Captain Goomba as seen at the end of Goomba's Booty Boardwalk.

“Yar! Reach me and get a Star! But that path's harder to walk than a lard-greased plank. Good luck!”
—Captain Goomba, Mario Party 8

Captain Goomba is a Grand Goomba who wears a pirate hat and appears as a non-playable character in Mario Party 8. He appears at the end of Goomba's Booty Boardwalk and gives players a free Star if they reach him. As his name implies, he is a captain of a ship and has a few pirate Goombas serving under him.

Captain Goomba's role was slightly tweaked in the Star Battle Arena. In this mode, he still gives arriving characters a star, but they must pay him 50 coins. Whoever gets the star from him first before their opponent does wins. However, if a player arrives with less than 50 coins, Captain Goomba lets them roll a Coin Block for a chance of winning 1, 5, or 10 coins, and then commands his crew of pirate Goombas to take them back to the start using a cannon.