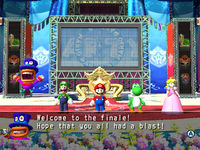 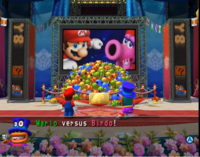 The Star Carnival Stage in the Star Battle Arena

The Star Carnival Stage is the main stage of the Star Carnival, located directly on the center of the Star Carnival. It features a large, jumbotron-like screen in the background that shows different objects every time, and two smaller screens which show sprites from Super Mario Bros. and an 8-bit sprite of the words "MARIO PARTY 8."

In the Party Tent, it is shown when the player completes a Battle Royale or a Tag Battle. Then, MC Ballyhoo speaks to the characters, gives Bonus Stars (if the player turned them on) and announces the winner.

A figure of the Star Carnival Stage can also be bought in the Surprise Wagon for 30 Carnival Cards.