“Beyond space! Beyond time! And beyond decency! We're in the blackest hole of all. Bowser's Warped Orbit! It's seriously sick and twisted! We're in Bowser territory now. And you'll play by HIS rules. So you'll start with 5 Stars... Then earn more the Bowser way: Stealing! Steamrolling! Savagery! You'll need two kinds of Candy... Bowser Candy and Bullet Candy! Chow down on these to steal Stars from each player you pass! Bowser Candy lets you smack 2 Dice Blocks, and you'll steal 2 Stars from each victim! Bullet Candy lets you blast farther! You'll get 3 Dice Blocks, but steal only 1 Star per victim. Study where foes are before chowing! Which will steal you more Stars? A short rampage? Or a long snipe?”
—MC Ballyhoo, Mario Party 8

Bowser's Warped Orbit is Bowser's board in Mario Party 8. In order to have it playable in Party Tent mode, the player must unlock it by completing the Star Battle Arena once.

Unlike boards themed around Bowser in previous Mario Party games, this board does not have a lava theme. Instead, this board is a space station located above a star. Additionally, Magikoopa and Toadies appear in shops and board events, rather than underlings like Goombas and Koopa Kids which appeared on Bowser's boards in previous games. The objective here is to steal Stars, with each player starting out with five (ten Stars for each team on Tag Battle mode).

This board is similar to Snowflake Lake from Mario Party 6 and Pyramid Park from Mario Party 7. However, instead of Chain Chomps to steal Stars, players must use special Candy to steal from their opponents: Bowser Candy and Bullet Candy, both of which are found only on this board. The Bullet Candy lets the player roll three Dice Blocks and steal one Star, while the Bowser Candy lets the player roll two Dice Blocks and steal two Stars. 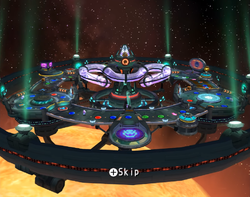 Landing on a DK Space causes Donkey Kong to appear on a Steel Barrel satellite, and give the player a free Star (a piece of Candy in Star Battle Arena). Landing on the Bowser Space causes Bowser to come down from his observation tower to steal a Star from the player (although if the player has no Stars, Bowser will give them ten Coins instead). Everyone is gifted a total of twenty Stars (five for each player in Battle Royale; 10 for both teams on Tag Battle), not including handicaps. However, when a player lands on the DK Space, one additional Star can be received, or in the case of a Bowser Space, that additional Star can be taken out of circulation.

Landing on the Lucky Space takes the player to Shy Guy's Space Buffet, which has a path of Blue Spaces, each one with three coins, and the player can also get three free pieces of candy, Bullet Candy or Bowser Candy.

One of the ? Spaces on the board causes Bowser to come down and chase the player all around the board in a complete loop. Anyone that is in their path will also get chased down (this essentially just moves all the players involved to the same space). The ? Space next to Magikoopa makes him use his magic to shuffle everyone's Candies around, like he did back in Mario Party 5. The ? Spaces (arrow spaces in Duel Battle mode) next to the Warp Tube[1] (underneath the observation tower) causes players to travel through the tube and reach to the other side of the board, always collecting twenty Coins along the way (but nothing in Star Battle Arena because the tube is part of the board's path, not a shortcut). All the other ? Spaces make Bowser reverse the direction of the flow of the board.

Another feature of the board is the three directional buttons (two in Duel Battle), which players encounter when the path splits into two. When a player steps on one, it makes the player go in a random direction: left or right.

In Star Battle Arena, the winning conditions are to steal Stars from their opponent via the Bowser and Bullet Candies until their opponent has zero Stars. Players start with three Stars each. During the Star Battle Arena, if the player defeats Blooper or Hammer Bro, they will get to fight Bowser in a void-like arena. Also, the player will unlock Hammer Bro or Blooper, depending on who they fought. The opponent is random unless the player is using one of those two characters, in which case the other one will forcibly be the opponent. The player must complete Star Battle Arena with the first unlockable character in order to unlock the second one.

The change of direction in this board resembles the gimmick of Backtrack, a duel board in Mario Party 3.

The following tables show how many spaces there are on the board, and how many there are of a certain type.