“The one where cool breezes blow across the hills and you want to relax on a blanket? That's Toad Road!”
—Bowser, Mario Party 9

Toad Road is one of the seven boards in Mario Party 9. The starting vehicle for this board is the Toad Mobile, as the Rickety Ride and the Wiggler Wagon must be purchased at the Museum. The mid-boss that guards the Fortress is a Lakitu. The main boss, which is fought at the end of the board in a forest is a Wiggler. This board is the beginning stage of the game and is simple for beginners. 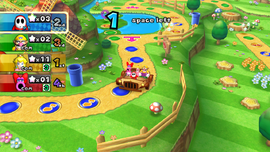 The players riding through Toad Road.

The players start out in front of a path leading through a plain. The players ride across the path, past a windmill, past a river, and up two short mountains, seeing lots of pretty flowers, jumping Goombas, trees and mushrooms along the way. At the top of one of the mountains is where the Fortress is and where a mid-boss, (Lakitu in solo) is fought. After the fortress is a large gap, which cannot be crossed due to the bridge having been destroyed at an earlier point. The path underneath the gap contains Mini Ztar Spaces, and across it are Mini Star Spaces. In order to jump across the gap, each player (with the captain, who rolls last, using a 1-10 Dice Block) must roll a combined total of at least sixteen with four people, twelve when playing with three, or eight when playing with two, on the Dice. Also, if all the players cross the gap, it will be still the captain's turn if there are still moves. Likewise, if all the players fall to the lower road, the captain will be the next player. After the mountain and the gap, the players rides the plain and reaches a forest where the Bowser Gate is and where a stage boss (Wiggler in solo mode) is fought. A lot of positive events happen on this board. One of these events is when the captain lands on a Lucky Space, upon which he or she will then climb a beanstalk to receive some Mini Stars (two for each space they pass).

The characters ride a car on this board. The vehicle that is available from the start is the Toad Mobile. The Rickety Ride and the Wiggler Wagon can be purchased from the Museum for 200 Party Points each.

In this Captain Event, the players are launched by a cannon to a small island shaped like the number 9. Each player rolls a Regular Dice Block once, in an order determined by the captain. There are several sets of Mini Stars scattered over the island, ending with a set of 10. The island also has several Dash Spaces, meaning that a single player could potentially obtain all of the Mini Stars on the island. The event ends when all Mini Stars have been collected or after all players have rolled the Dice Block once without collecting them all. If the last player does not reach the end of the island, everyone will enter a warp pipe and will be headed back to the main route.

The name of this minigame is Sock It to Lakitu. The players are on a grassy platform above the clouds, Lakitu then hovers in front of the platform. Lakitu then throws Spinies on the platform which makes the player lose points when hit. Floating blocks are scattered on the platform. The players must hit the block when it shows a picture of a Bill Blaster. The Bill Blaster shoots a Bullet Bill at Lakitu giving the player points. Players must avoid hitting the block when it has a picture of a Spiny because it will come out of the block. Touching a Spiny will deduct one point off the player's score. After the players knock Lakitu's life to half, he will throw a giant Spiny which will deduct two points off the player's score.