“Teleport from space station to space station as you marvel at the wonders of the universe in this outer-space race for the stars! It's one small party for man and one giant party for mankind!”
—Mario Party 5 instruction booklet, page 28
“Welcome to the Future Dream! This is a world where a dream of the galaxy comes alive! Entertain your outer-space curiosity in this dream!”
—Eldstar, Mario Party 5 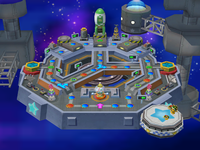 Future Dream is a board map in Dream Depot seen in Mario Party 5. The flavor text in the instruction booklet makes a reference to Neil Armstrong's famous quote "That's one small step for [a] man, one giant leap for mankind." Created from dreams of the future, the board is a set of three space stations and is reminiscent of low-budget television shows. The only way to travel about the stations is by teleportation devices, rocket ships, or shortcuts. 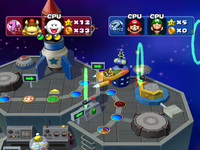 The air taxi in action.

The Event Spaces on the central platform are next to three rocket ships, which can be used by landing on the spaces. Each rocket takes players to either the left or right platforms' landing pads. There is a rocket ship game on the left station that can be played only if a player lands on the corresponding Event Space. In this game, one controls the levitation of their ships to try and collect coins from UFOs. Two more Event Spaces can be seen near a robot's arms on the right station, and will activate a slot machine minigame. If played skillfully, players may earn special capsules by lining up the slots; a Mushroom Capsule is the consolation prize. Finally, the Event Spaces next to the "air taxis" on the left and right platforms allow players ride from one station to the other for a fee of ten coins. Players can also use the floating platform on the left or right stations as a small shortcut.