“Well met, Mario. But here's where I turn you into confetti and scatter you to the winds!”
—Megasparkle Goomba, Paper Mario: Sticker Star

The Megasparkle Goomba is a Goomba acting as the boss of World 1 in Paper Mario: Sticker Star. The boss itself is a large, flat, shiny Goomba made up of sixteen individual Goombas, with one in particular wearing a Royal Sticker. The Goombas reside at Goomba Fortress, and guard the red Royal Sticker. 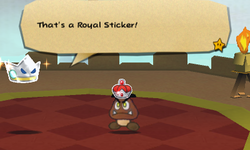 Kersti noticing the Royal Sticker worn by the Goomba.

The sixteen Goombas that form it were once normal Goombas that resided at Goomba's Fortress. When Bowser accidentally broke the Sticker Comet and scattered the six Royal Stickers across the Mushroom Kingdom, the red Royal Sticker fell down to the top of the fortress. One curious Goomba grabbed it and became corrupted, sticking the Royal Sticker to his head and wearing it as a crown. The corrupted Goomba soon became the self-proclaimed boss of the Goombas and became obsessed with shiny and sparkly things. The Goomba ordered his Goombas to cause trouble in the grasslands and Decalburg, as the Goombas now had power from Bowser.

When Mario and Kersti make it to the top of Goomba's Fortress, the corrupted Goomba encounters Mario and threatens to turn him into confetti. Kersti recognizes the crown as a Royal Sticker and orders him to give it back. The Goomba then reveals that Bowser gave him the order to guard the Royal Sticker and, with the Royal Sticker, he will become more powerful. The Goomba immediately orders fifteen hidden Goombas to attack Mario. At first, the Goombas attack regularly, as a group, but soon, the corrupted Goomba orders the other Goombas to merge with him to become the more powerful Megasparkle Goomba. 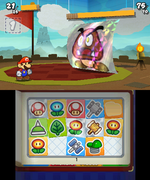 The Megasparkle Goomba has 90 HP and possess two powerful attacks; it can leap high into the air and come crashing down on Mario, or curl up into a tube and roll into Mario.

Like any ordinary Goomba in the game, Megasparkle Goomba can fold up into a sharp cone. This makes him unable to be stomped on with normal Jump or Hopslipper stickers. Later in the battle, Megasparkle Goomba turns around, revealing the Goombas. It can then send these Goombas, up to three at a time, flying into Mario. All of the Goombas can also jump up separately and crash down as a whole. Using an effective sticker when Megasparkle Goomba is coming apart will weaken him with double damage.

The key for beating the boss is waiting until the sixteen Goombas reveal themselves and start to flip; at this moment, Mario should either use the Scissors or Fan sticker to make all of them collapse. After doing so, the Goombas abandon their corrupted master, who is left weakened with 1 HP. Alternatively, it is possible to defeat Megasparkle Goomba without using Things, resulting in the same outcome, as well as a suggestion from Kersti to use a "more effective sticker" next time.[1]