A Bony Beetle is an undead skeletal version of a Buzzy Beetle that has made appearances as uncommon enemies throughout the Mario franchise. What generally distinguishes them from Buzzy Beetles is their ability to reassemble when stomped on, as well as their retractable spikes.

Bony Beetles first appear in Super Mario World and its remake; they mostly appear in castles and fortresses, with their first appearance being in the depths of Vanilla Fortress. They appear as bipedal skeletal creatures with red shoes, though the blue-tinged one shown in the credits cutscene has blue shoes. Bony Beetles simply walk around, then stop and stick out spikes. They can be defeated with the swing of a cape, but are immune to fireballs. If Mario stomps one, it will fall apart and reassemble seconds later, similar to a Dry Bones. Due to graphical limitations, Bony Beetles appear to turn into Dry Bones whenever they collapse.

In Super Mario Advance 4: Super Mario Bros. 3, Bony Beetles appear in the World-e levels Swinging Bars of Doom and Bowser's Last Stand. They look and act nearly the same way as in Super Mario World. However, their falling apart animation has been edited to no longer be exactly the same as the Super Mario World design of Dry Bones. Additionally, if it is on a block, it cannot be defeated by hitting it from below, unlike most enemies.

Two Bony Beetles, one retracted into its shell while the other is not, in New Super Mario Bros. U Deluxe

Bony Beetles reappear in New Super Mario Bros. U and New Super Mario Bros. U Deluxe, making their first HD appearance. Their behavior is exactly the same as in Super Mario World; they walk around and suddenly stop to stick out their spikes. When stomped, they fall apart and reform a few seconds later; immediately after reforming, they will always stick their spikes out before walking around again. Notably, they now resemble their Paper Mario: Sticker Star appearance, and are quadrupedal, making them closer in appearance to Buzzy Beetles; when they extend their spikes, they more closely resemble Spinies as a result of their shell's bony appearance.

They typically appear in later towers and castles, but they can also appear in volcanic and subterranean levels as well. Bony Beetles can be defeated by turning them to ice with an Ice Flower, crushing them, or by hitting elastic platforms underneath them. A temporary way to dispatch a Bony Beetle is to let its head get crushed between a moving platform and a wall in Ludwig's Clockwork Castle after stomping it. This only lasts as long as the Bony Beetle remains on screen, meaning it will reassemble if the player moves away far enough and returns to where the enemy is found.

In New Super Mario Bros. U Deluxe, they have sound effects when they stick out or retract their spikes. 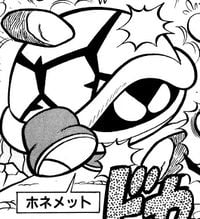 A Bony Beetle in Super Mario-kun

A giant Bony Beetle has appeared in volume 4 of Super Mario-kun, which deals with Super Mario World. Unlike in the games, it can shoot spikes to form a prison-like structure and shoot lasers from its eyes. When it rams into Mario, it sends him flying into a block, releasing a Dragon Coin. When Yoshi grabs the Dragon Coin, his tongue swirls out of control and defeats the Bony Beetle.

A spiked and normal Bony Beetle.

They are later seen in Paper Mario in an underground section of Bowser's Castle (and several other places). If they spot Mario, they will try to land a First Strike with a Shell Toss attack. They attack in different ways depending on if their back spikes are extended: If their spikes stick out, they jump onto Mario, dealing 5 points of damage, and cannot be jumped on; if their spikes are retracted, they simply use a basic Shell Toss attack like a Koopa Troopa for 3 points instead. They will retract or extend their spikes after being attacked by Mario and his partners. While their spikes are retracted, Mario can Jump on them to flip them over, setting their Defense to 0 and causing them to waste a turn correcting themselves.

Bony Beetles appear as enemies in the Nintendo 3DS game Paper Mario: Sticker Star. Their appearance now closely resembles the standard Buzzy Beetle design more than their previous iterations. Just like in Paper Mario, Bony Beetles can protrude and retract their spikes at will, and are also immune to fire-based attacks. They cannot be jumped on unless Mario uses an Iron Jump sticker; if he uses one when the spikes are not displayed, they simply repel the attack by extending their spikes. A Bony Beetle's only attack is protruding their spikes (if they have not already) and then headbonking Mario; much like a Goomba, the Bony Beetle will roll over if the attack misses.

Their appearance in this game was later used in New Super Mario Bros. U, as stated above.

While Bony Beetles do not appear physically in Paper Mario: The Origami King, concept art at the Musée Champignon shows that they were planned to appear as Folded Soldiers. Additionally, their name is present in an unused string in the game's data.

Bony Beetles appear in Mario Party: Island Tour on the Star-Crossed Skyway board. In the second and third Star Stages, a Bony Beetle gives out two Mini Ztars. When idle, it has its head out and its spines retracted, but when it first appears and when the player receives the Mini Ztars, it pulls its head into its shell and sticks out its spikes.

In Super Mario Party, a Bony Beetle makes a cameo appearance in the minigame Absent Minded, where it is one of the characters that can be chosen as a guess.

Bony Beetles appear in Puzzle & Dragons: Super Mario Bros. Edition, as uncommon enemies. They are Dark-attributed enemies and are mainly found in towers and castles.

As teammates, Bony Beetles have an HP rating of 4/6, an ATK rating of 3/6, and a RCV rating of 1/6. Their Beetle Shield Skill reduces the damage received by half for two turns, and their Awoken Skill, Dark Boost, raises the ATK of the player's Dark team members if a horizontal line of Dark orbs is cleared.

Bony Beetles appear in Dr. Mario World as assistants. In stage mode, their effect is to increase the score that resulted from a capsule match if that match eliminated four or more viruses simultaneously, where the percentage of the score increase is greater at higher levels, where it is 15% at the first level and 75% at the maximum level. In versus mode, their effect is to eliminate the lowest row of objects when the player's play area shrinks to only three rows left, meaning that the area would need to have nine rows of Empty Blocks for this effect to activate, where it is only 20% at the first level and 100% at the maximum level. The Bony Beetle assistant can be obtained as a reward for clearing the first area in World 13.

Bony Beetles make their Mario Golf series debut in Mario Golf: Super Rush, where they appear as NPCs in the game’s story mode. This is the first game where they are capable of speech.

Bony Beetle
Tribe: Ghost clan
Disposition: Stubborn
Game appearances: World
The skeletal ghost of the Buzzy Beetle?
The hard-shelled Buzzy Beetle has become bony. If you step on it, it crumbles, but it will come back after a while. It will also stop and produce spikes, so you should step on them while you are walking carefully.