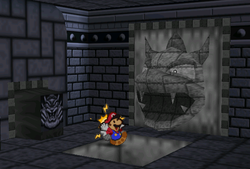 Mario falling through a trap door created by a Guard Door

Guard Doors are huge stone faces of Bowser that act as gates in Paper Mario. In three areas of Bowser's Castle a Guard Door can be found, they'll need to have something be done before they let Mario pass. If Mario completes the objective, the gate will split in half and open. Their roles in the game are similar to the Thwomp quizmasters from Paper Mario: The Thousand-Year Door and the three Dorguys from Super Paper Mario.

The first one Mario encounters opens a trap door, sending Mario to a jail cell. After Mario escapes, the gate lets him in. The second quizzes Mario five times on various enemies; however, if Mario answers three questions wrong, he will then be forced to fight three Anti Guys. The third and final Door sends Mario into a battle with the "Super Ultra Mighty Koopa Bros. the Great", but they are knocked away by the new and improved Jr. Troopa, whom Mario then has to fight. The third Guard Door is the exit from Bowser's Castle leading up to Peach's Castle and the final battle with Bowser.

A Guard Door also makes an appearance in issue 27 of Super Mario-Kun, which is an adaption of Paper Mario. At one point, Mario starts drawing swirly glasses and a mustache on the statue's face, much to Mario's partners' disbelief. The statue then tests Mario by having Shy Guys, Dry Bones, Koopa Troopas, and Goombas walk around, much as in the game. The statue than spawns a Hammer Bro while Mario shrinks. Twink then rescues Mario and drops him into some liquid, having Mario grow up and then eventually defeat the Hammer Bro and the statue.