Not to be confused with Noko Bombette.

“I have a little score to settle with those Koopa Bros.!”
—Bombette, Paper Mario

Bombette is one of Mario's partners that appears in Paper Mario, and the third party member encountered in the game. She is a pink Bob-omb (most likely a Bob-omb Buddy) with a ponytail-shaped fuse and a white heart-shaped turn knob with no holes. Her name is a simple combination of "bomb" and "-ette," a suffix used to denote a female subject.

Bombette first appears amongst the other friendly Bob-ombs imprisoned in a room within the Koopa Bros. Fortress; upon meeting her, she demonstrates an eagerness to get back at the Koopa Bros. for capturing her. She can be used to destroy cracked walls and other similar obstacles in the overworld, a role that would carried over in the next two games of the Paper Mario series; the role is taken by Admiral Bobbery in Paper Mario: The Thousand-Year Door and the Pixl Boomer in Super Paper Mario.

A portrait of Bombette exploding

“Mario rescued me. So I figured the least I could do was help him even the score with Bowser, King of the Koopas!”
—Bombette, Paper Mario

When Mario goes to the Koopa Bros. Fortress, Yellow Ninjakoopa traps Mario in a cell. Here, Mario meets Bombette, who was imprisoned in the fortress for exploding next to the Koopa Bros.; she helps Mario by demonstrating her field ability, walking over next to a crack in the wall and exploding to make an escape route out of the cell, and then joins Mario's party. After she helps Mario defeat the Koopa Bros., she decides to join Mario's party permanently and aid him on the quest to find the Star Spirits. Prior to these events, Bombette had broken up with another Bob-omb named Bruce; he constantly looks for a chance to get back together with her, only to be met with constant and comical refusal each time.

A cracked boulder for Bombette

Her field ability, in addition to destroying walls, can also be used to flip switches and attack enemies; both this and Kooper's field move are the only ways that Mario's partners can score a First Strike. In battle, Bombette can Body Slam foes or explode on them by using her Bomb attack. After upgrading, she can learn more powerful moves like Power Bomb, which hits all enemies on the ground, or Mega Bomb, which hits every enemy in battle.

When Bombette blows up a particular cracked wall in Crystal Palace, four Bombette imposters show up, whose quotes always end with stars, hearts, extra exclamation points or question marks, and extra periods. These are tells that the Bombettes are fake; the real Bombette quickly loses patience with the charade and begs Mario to hit the imposters with his hammer. After Mario exposes the fakes, the real Bombette shows tells him that if he'd hit her, she was going to bomb him the next time he napped. If Mario hits the real Bombette, however, she calls him terrible, and they must fight the Duplighosts.

Bombette receives three letters at the Toad Town Post Office throughout the game: one invitation letter from the Dry Dry Railroad Transportation Department, and two love letters from Bruce.

Goombario can use Tattle on Bombette only after Mario falls into a cell where she is imprisoned in Koopa Bros. Fortress but before she joins Mario's party.

In Super Paper Mario, Bombette appears as a Catch Card found on the 40th floor of the Flopside Pit of 100 Trials. She and all the other partners from the Paper Mario series could also be seen very briefly at the beginning of the game, in a photograph at the Mario Bros.' House.

In Mario Golf: Toadstool Tour, the name "Bombette" can appear on the leaderboard. 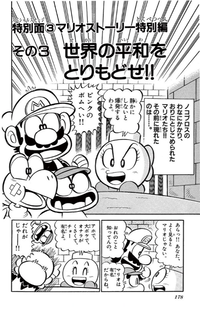 Bombette is the only party member from Paper Mario to not appear in the game arc present in Super Mario-kun. However, in the last three chapters of volume 26, a special and shorter version of the events of Paper Mario are told. At the end of the second chapter, Mario, Goombario and Kooper are captured by the Koopa Bros. and they meet Bombette in the cell. In the third chapter, Bombette presents herself to them. After she explains she is a friendly Bob-omb, Mario kicks her against a cracked wall, freeing them. Bombette then accompanies them, not having a relevant role for the rest of the chapter. Like many other Bob-ombs in the manga, she has a mouth and more expressive eyes, but she is lacking her ponytail-fuse.

Bombette was featured in a 2015 press release made by Nintendo for Women's History Month, which highlighted some of the company's female characters.[1]