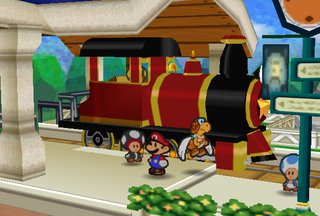 Mario and Parakarry standing by the K64

The K64 is a steam locomotive on the railway lines (Dry Dry Railroad) between Toad Town and the station at Mt. Rugged in Paper Mario. Its name is a reference to the Nintendo 64 (which is abbreviated as "N64") and is mentioned on the back of the Toad Town News Flash board after Chapter 1. Mario has to take the train to Mt. Rugged in order to proceed to Dry Dry Desert. To access the train, he first must destroy a rock blocking the railway lines with Bombette. Mario is then able to use the railways free of charge.

The K64 is similar to the trains that appear in Kalimari Desert from Mario Kart 64. The background music that plays while Mario rides the train is an arrangement of the music from Kalimari Desert as well.