The name of the course is a portmanteau of "Kalahari," which is a real-life desert in Africa, and "calamari," the word used for squid-based food. In Paper Mario, a train known as the K64 is based on the train in the course, and when the player rides on it, an arrangement of the course's theme plays. 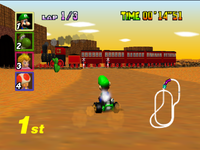 The race starts out next to a large cliff formation. Upon the first turn, racers see how empty the desert really is. At the end of the turn, the racers encounter the train for the first time. After passing the tracks, the players race alongside the track of the train (though it is in a cave and not visible), eventually running into it a second time. After this encounter, the racers race along the edge of the map and eventually advance back to the finish line.

If the player drives over the sand, their kart will move slower, and if they enter the darker portion of the sand, Lakitu will pull them out, as it is an out-of-bounds area.

The course's most notable feature is the two trains that go through a mesa. The trains constantly move around the track, often passing through the racers' path. Depending on what mode is being played, the trains may or may not have coaches attached to them: when playing in single-player, the trains each have a tender and passenger cars, whereas in two-player mode, the trains' lengths are halved, having a tender and only one passenger car each, and in three- or four-player mode, the trains consist only of the engine, with no tender or passenger cars present. If the player runs into one of them, they will be thrown in the air. CPU drivers will pull their brakes and stop at the railroad crossings when a train passes by. It is possible to drive on the train's track; however, this costs the racer time. It is possible, but very difficult, to cross the train track while the train is there by driving through the gap between the coaches. If a player travels through the train tunnel, they typically bypass the finish line, not moving on to the next lap as the other racers.

The course in Mario Kart 7

Kalimari Desert returns in Mario Kart 7 as the first course of the Leaf Cup. There are now two shortcut ramps near the end of the first corner and before the third corner of the track to accommodate the new gliding feature, allowing racers to glide over the trains. The players can also use mushrooms to gain easy access to these ramps. Several wooden ramps also litter the inside and outside of the track, and as always, can be tricked to gain a small boost. However, the train tunnel can no longer be entered because it is now an out-of-bounds area, making the lap glitch impossible in this game. The trains are also shorter: they have three wagons while they had five in the original version of the track, and they now seem to ride more slowly.

Much like in Mario Kart 64, two trains are present, but only one train is present when doing online multiplayer races.

Unlike in Mario Kart 64, the mini-map of this course does not show the path of the train track.

When the player crosses the finish line to start another lap, Lakitu is shown on the right side of the player, holding the lap count signs. 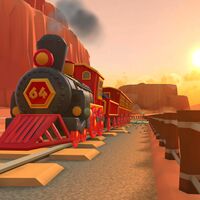 Kalimari Desert reappears in Mario Kart Tour, starting with the Tokyo Tour, alongside Tokyo Blur, SNES Mario Circuit 2, SNES Choco Island 2, SNES Rainbow Road, 3DS Mario Circuit, and 3DS Neo Bowser City. The course's starting line now features a wooden banner with the classic Mario Kart logo on it and a wooden wagon wheel resting along the right side of the post, rather than taking its appearance from Mario Kart 64 and Mario Kart 7. Since racers are always moving forward, colliding into the train causes them to launch over it unharmed while they perform a Jump Boost. The train can also be knocked into the air with a Super Horn, a Mega Mushroom or a Bowser's Shell. This course is a favorite of Ludwig, Morton, Hammer Bro, Yellow Toad (Pit Crew), Green Shy Guy, Peach (Explorer), Yoshi (Kangaroo), Luigi (Vacation), Daisy (Farmer), Cat Mario, Shy Guy (Pastry Chef), and Kamek. It can also be a favorite of Mario (Halloween) and Meowser if they reach level 3, and Waluigi and Lakitu (Party Time) if they reach level 6.

The course uses the musical arrangement from Mario Kart 7 rather than the original.

Starting from the Wild West Tour, a rerouted version of this track known as Kalimari Desert 2 (N64 Kalimari Desert 2 in-game when selected) is featured. It has two sections: one that starts on the main route but switches to the railroad section at the second intersection, and the other that starts in the tunnel and goes back to the main route again at the second intersection, after which it continues on like normal. The course is the only course in Mario Kart Tour to use both the classic and modern Mario Kart logos, with the starting banner using the classic logo and the banner in the train tunnel using the modern logo. Kalimari Desert 2 is a favorite of Yellow Toad (Pit Crew), Peach (Explorer), Cat Peach, Bowser Jr. (Pirate), Pauline (Party Time), Mario (Sunshine), Luigi (Lederhosen), Mario (Aviator), Dry Bones (Gold), Wario (Cowboy), and the Bronze Mii Racing Suit. This course is also a favorite of Captain Toad, Toadette (Explorer), and Dixie Kong once they reach level 6. The course appears as Kalimari Desert 2R (reverse) and Kalimari Desert 2T (with ramps), as well as Kalimari Desert 2R/T (reverse and with ramps) which was introduced later in the Toad vs. Toadette Tour.

The first section begins from the regular starting line. The course starts out following the same path as the original, with the first glider shortcut still being accessible. However, a wooden ramp has been added shortly before the first railroad crossing, and ramps with Dash Panels appear on both sides of the first intersection allowing racers to jump over the railroad. The course continues and curves to the right toward the tracks, though the glider shortcut normally found in this area is blocked off to prevent racers from skipping the railroad section entirely. At the second railroad crossing, racers are rerouted onto the railroad. The course continues on the tracks, with the second section of the course beginning from the entrance of the railroad tunnel near the starting line, or from the other entrance to the tunnel in the Reverse variant. The train starts out right outside the tunnel near the first intersection in the normal and Reverse variants. Upon reaching the second intersection again, racers are diverted back onto the normal course to continue along the original path. Wooden trick ramps have been added onto the path shortly after this intersection and before the final turn leading to the Finish Line.

In the trick variant, many ramps are added. Rather than jumping over the first intersection, this variant has a ramp bring racers onto the railroad tracks, dropping them onto the tracks shortly after the first crossing. Upon leaving the tunnel, racers are instead diverted back onto the main path either by going up a curved ramp and tricking off of it or by driving through an opening in the ramp. After that, the course is mostly similar to Kalimari Desert T with some differences such as a large ramp being added near the Finish Line. In the reverse and trick variant, the track starts off like the normal reverse variant. When it gets near the crossing, there is a ramp that puts racers on the track. Upon landing on the track, it continues like the trick variant, but with different ramps. Upon leaving the tunnel, racers are then diverted onto the normal track by another ramp and continues like the reverse variant, but with elements from Kalimari Desert T, like a ramp above the first crossing.

Only one train is present on the track in all variations, moving much slower than the original trains since it now shares the tracks with the racers. The train always moves around the tracks in the opposite direction the racers would, and as such, the train travels opposite to its normal direction in the Reverse variant.

Combining the totals for the two different iterations together, Kalimari Desert has appeared in forty-two different tours, as of the Animal Tour, the most out of any course to date, beating the second most frequent course, DS Waluigi Pinball, by fourteen tours.

The first lap takes the player around the standard Kalimari Desert route, though arrow fields can be seen blocking off the path to the train tracks and train tunnel entrance that's next to the first railroad crossing. When the second lap begins, the route starts following that of Kalimari Desert 2, where a large red ramp commonly seen in Mario Kart Tour's T and R/T courses appears at the second railroad crossing to divert the player onto the tracks. Like the arrow fields, the ramp is independent to each player in multiplayer, meaning that it only appears for each player on their second lap, while it is invisible to players that are on the first or third lap. The third lap begins after the player enters the tunnel. After exiting the tunnel, the route will finish as normal.

In all three laps, upon reaching the first railroad crossing, the player can choose to either continue going on the main route, or go along the train tracks. However, the Item Box placements do change with each lap, with two Double Item Boxes only being present on the train tracks during the final lap. Regardless of the player's decision though, the two paths meet at the second railroad crossing.

Like Kalimari Desert 2, there is only one train instead of two, though the train moves much faster and once again hurts racers who come in contact with it, like the versions prior to Tour. The fence on the left side of the train tracks has been removed, and the Glide Ramp after the first railroad crossing was moved up and is also closer to the track, presumably to accommodate Kalimari Desert 2's layout (as in Tour, the ramp is blocked off). Inside the tunnel, lights have been added onto the walls. The eagles seen in Shy Guy Falls now fly above the course. The music has been rearranged with more live instruments, as well as trumpets in place of the whistles in the original. The minimap again shows the glider ramp locations on it, as was the case in Mario Kart 7. Pipes have been added to the tops of some mesas.