Wario Colosseum is the first course of the Special Cup in Mario Kart: Double Dash!!. As the name implies, is a raceway based on the Colosseum that belongs to Wario, making it his home course of the game. It is the longest course in the game, having it reduced to two laps in Grand Prix mode and in the "Recommended" option of laps in VS mode; it is one of the only two courses in Mario Kart: Double Dash!! to not, by default, have three laps, with the other being Baby Park with seven laps. A gold "W" in a red background appears on the track immediately after the long ramp, as well as a picture of Wario above the downhill section and a sign that says "Wario Kart" can be seen at the beginning of the course. Outside of the colosseum, Mushroom City can be seen in the distance. This course shares its background music with Waluigi Stadium. Most of the course is built using Kanaami Roads. 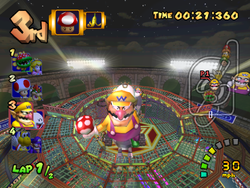 A screenshot from the course depicting one of the larger jumps

The course first starts at a straight road, which leads to a curve to the left. Past that curve is a ramp with Dash Panels on it and an Item Box to grab (surrounded by a Fire Chain). After the ramp is a small, twisty road with an overhang that leads into another ramp with a Fire Chain, with another Item Box in it. After the ramp is a curve to the left, which leads to a straight road with a set of Item Boxes. After the Item Boxes is a large ramp with Dash Panels on it that leads the player into the dome-shaped area, that leads the player in a corkscrew for the next moment. Past the corkscrew curving to the right is a downhill road that turns left, leads into a straight road, and curves left again, leading into a hill with Dash Panels that will send the player flying.

Past the hill is a curve right that leads the player into a U-turn, and after the U-turn is a steep downhill road that makes the player fly instead of driving downwards. After the downhill road is a set of Item Boxes in a curve to the right.

After that giant pit is an ascent of the road that leads into a 90 degree turn left, underneath an overhang. The road underneath the overhang slightly curves to the right. After the overhang, the road still curves to the right, until it is straight again and then leads to a ramp with Dash Panels on it and the last set of Item Boxes. After the ramp is a curve to the left, which leads into the straight road into the finish line for the start of lap two.

There are no hidden shortcuts in this course. The only route that acts the most like a shortcut is the ramp over the pit.