This article is about the race course from Mario Kart Wii. For other race courses with similar names, see Luigi Circuit.

Luigi Circuit is the first course of the Mushroom Cup in Mario Kart Wii. It is a fairly simple course with no hazards and features a large boosted turn approaching the finish line, and is the shortest Wii course in the game. This course can also be seen at sunset during the credits. It shares its music with Mario Circuit, and an arrangement of it is heard in the title theme, demo movie, options menu, Block Plaza, Award Ceremony, and second half of the credits music. The course's overall layout resembles that of the real-life Autodromo Nazionale Monza in Italy. This is the last Luigi-themed new course in the series and the only one that has not yet reappeared as a classic course. 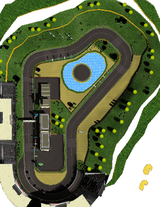 An overhead view of the course.

The race starts out in front of a large crowd stand full of Toads, Hammer Bros., Shy Guys, Birdos, Goombas, Monty Moles, Boos and Mii, with a Luigi Cap on top, similar to that seen in the Mario Kart 64 version of the course. Several garage buildings, more spectating Miis and a giant statue of Luigi appear on the right of the Finish Line. A Cheep Cheep-shaped balloon can be seen flying overhead which takes off from the landing platform in the middle of the lake. Hills similar to those seen in New Super Mario Bros. can be seen in the background. If the player is racing as a Mii or during the staff credits, the head of the Luigi statue and Luigi's face on some of the Luigi Circuit signs will be replaced with heads of random Miis from the player's system, or in the case of in the staff credits, the head on the Luigi statue is changed to the Mii the player selects for their license regardless of if the player's Mii was in the race or not.

The course starts with a turn to the right, followed by a short straight section and a gentle left turn followed by a U-turn to the right. This section resembles the first sector of the Monza F1 track without the chicanes. This is followed by a longer straight with another gentle left turn, resembling the Variante Ascari chicane in the real life Monza track (as if the chicane had not been taken by F1 cars), followed by the large right turn towards the finish line with many Dash Panels, leading into the last straight segment (this resembles Curva Parabolica, the final corner of the Monza track).

It has been requested that this section be rewritten and expanded to include more information. Reason: specify which guide the third bio is from

The second Luigi Circuit tournament took place at sunset as seen in the credits, and was a Grand Prix race with no restrictions, though Bob-omb Cars were added to the track. This tournament was the first tournament of May 2009.