The Zip Zip (known as the Rapide in Europe and Oceania) is an Off-Road-type outside drifting bike in Mario Kart Wii that can only be used by medium-sized characters. It resembles a Benelli 650 Tornado. The emblem is located on the sides of the bike. Although this bike doesn't have a kart counterpart for its size class, its large counterpart is the Phantom.

The Zip Zip can be unlocked by winning the 100cc Lightning Cup or by playing 2,100 races.

The Zip Zip features great off-road, enabling it to take off-road shortcuts without any major speed loss. Additionally, the Zip Zip has the best off-road stat not only in its size class, but also out of all drift type bikes in the game. If Yoshi rides the Zip Zip, it ties with the Magikruiser for having the best off-road stat in the game. It also features good handling and shares the same drift stat as the Spear. However, unlike the Super Blooper and Dolphin Dasher, it is slower than the Standard Kart M and Standard Bike M (its speed tying with the Standard Kart S), but has a better Mini-Turbo (also tying with the Standard Kart S, as well as the Offroader). Its weight is slightly below average (tied with the Tiny Titan), and its drifting (also tied with the Tiny Titan) is rather low. Its acceleration is tied with the Magikruiser (its indirect group counterpart), and its stat total is 308 stat points.

Compared to the Phantom, it is slower and lighter, but has slightly better handling, drift, acceleration, offroad and mini-turbo. 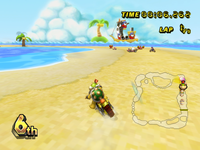