The Piranha Prowler is a large Weight-type kart that appears in Mario Kart Wii. The character's emblem is on the kart's forehead and seen on both sides of the vehicle. The kart resembles the Piranha Plant, specifically Petey Piranha, with Funky Kong's color scheme resembling him the most. The kart can be unlocked by winning the 50cc Special Cup, or by playing 600 races.

The mouth of the kart opens up when driving; this is most noticeable when it spins out, the player does a trick or blasted out of the cannon in GCN DK Mountain, DK Summit and Maple Treeway, the speed jump in N64 DK's Jungle Parkway and the Launch Star in Rainbow Road.

Bowser's Piranha Prowler has the highest possible weight stat in the game. 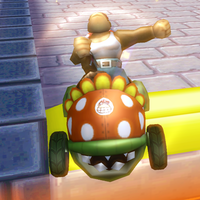 "Heavyweight Kart racers (& those who love them—you know who you are) are a special breed and they gravitate toward a certain type of vehicle. Piranha Prowler is that kind of Kart and it'll let you throw your weight around!"