“I feel like The Man hopping into my wonderful Wario Car”
—Wario, Wario Land 4 instruction manual

The Wario Car (or Wario's Jalopy[1]) is a vehicle that Wario drives. It is purple in color, and its design is based on a 1958 Cadillac Eldorado, while also bearing a resemblance to the Batmobile from the Batman comics. It first appears in Wario Land 4.

The Wario Car in the Wario Land 4 intro

Sprite of the Wario Car from Wario Land 4

In Wario Land 4, Wario reads an article about a pyramid hidden deep in a Jungle, with a large amount of treasure hidden inside. Wario uses his Wario Car to cross a desert to reach the pyramid, and to return with the treasure.

If the player completes certain difficulty modes, Wario will drive different vehicles in the ending credits.

An enemy resembling a small Wario driving the Wario Car with spikes on its front can also be seen in levels of Topaz Passage.

The Wario Car has a minor appearance in the intro, where Wario is seen sleeping in it.

In the instruction booklet of WarioWare, Inc.: Mega Microgame$!, Dr. Crygor states that he created Wario's car. The actual vehicle makes a brief appearance in the microgame Produce Pandemonium, where Wario is seen driving it.

In WarioWare: Touched!, a silhouette of Wario driving in his car appears in the second level of the microgame Public Transportation, chasing the rail cart.

In the WarioWare Gold version of the WarioWare: Smooth Moves microgame Road Wario, the driver and car from the original version are replaced by Wario and the Wario Car, respectively.

In WarioWare: Get It Together!, the Wario Car appears in 18-Volt's gallery, where he and 13-Amp pose in front of and on top of it respectively.

In Mario Kart: Double Dash!!, it is the signature kart of Wario and can fit two people. In the manual for Double Dash!! it was mentioned that the Wario Car's top speed was 450 km/h (280 mph). However, for the Mario Kart Grand Prix, its engine had been turned down.

Unlike Wario Land 4, the Wario Car in Mario Kart Double Dash!! does not have a windshield.

In Mario Kart DS, Wario has a new vehicle named the Brute. The appearance of this new kart resembles the Wario Car. However, it is black instead of purple, has a white checkered pattern in front as opposed to Wario's trademark mustache, and has regular black-wall tires instead of white-wall tires. 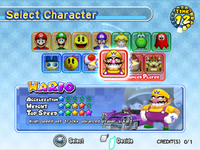 In Mario Kart Arcade GP, the Wario Car makes an appearance as one of Wario's special items. It is functionally identical to the Star, but it also grants the cosmetic change of turning Wario's kart into the Wario Car temporarily. The Wario Car reverts back to a standard kart after the item's effects wear off. A variant of the item known as the Wario Car+ exists. This variant extends the duration of the invincibility.

In Mario Kart Arcade GP 2, Wario receives a special kart, which is the Wario Car. It has very high top speed and high weight, but abysmal acceleration. The aforementioned Wario Car item has been removed, as all characters now use the Star as their invincibility item.

In Super Smash Bros. Brawl, it is featured on a sticker that raises launch power by 47. It can only be used by Wario during the Subspace Emissary.

In Mario Party 10, a toy-like Wario Car can be seen on the southern side of Wario Board in amiibo Party. It is simply a background element.

In Tomodachi Life, the Wario Car makes a minor cameo in the Promo (Rock & Roll) background in the Photo Studio.