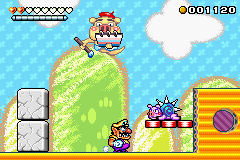 Dendens are enemies from the Game Boy Advance game Wario Land 4. They are found exclusively in Doodle Woods, where they are the creations of Hoggus who uses his sketchbook to bring them to life. A similar species known as Butatabi is another creation of Hoggus.

Denden are pig-like creatures with a spiked snail-like shell. Once they land on the ground, they start crawling from side to side. If Wario gets close to a Denden, it will turn to him, curl up inside its shell and roll towards him. While the enemy is rolling, Wario can ground pound nearby to change the enemy's rolling direction. Once the enemy hits a wall as it rolls, it disappears. Otherwise, the enemy can only be defeated while in its initial state. To defeat a Denden, Wario can ram at its open head. Alternatively, he can ground pound nearby or jump into it from a platform below to flip it upside down and then ground pound again on it. He will not receive any Coins though, as these enemies can respawn an infinite amount of times.