The six kinds of jewels. 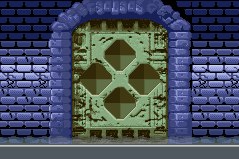 The door to the boss, which opens when all jewels in the passage have been collected.

Jewels[1] are collectables in Wario Land 4. Each one is made up of four jewel pieces found in each level of the game. Wario must collect these to make progress, as at the end of each passage there is a door which opens once all jewels are recovered. Opening the door grants Wario access to the boss of that passage.

The color of the jewels depend on which passage they are found in.

In the Entry Passage and the Golden Pyramid, there is only one level with a single jewel to recover. All the other passages have four.

Jewels also appear in Densetsu no Stafy 3. Wario collects four blue ones with Stafy in Kaitei Iseki but Kyorozou takes them away in Kaitei Iseki's level 4 so Stafy and Wario have to retrieve them. They are used to open up the door in level 4 leading to the area's boss — Gachatakkoru.

Jewel coverage on other NIWA wikis: