Not to be confused with Flower Fields. 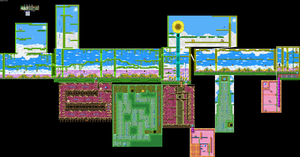 Wildflower Fields is a level in the Game Boy Advance game Wario Land 4. It is the second level of the Emerald Passage. There are huge sunflowers dotted everywhere throughout the stage, big enough that Wario can travel inside their stems; their leaves can be used as platforms. The Beezleys here can sting Wario to make him turn into Puffy Wario, which enables him to ascend up to secret places. However, there are hazardous spikes to stop Wario from going up. The switch here is located at the end of the level. The Kaeru Blocks here open up another area above the path that Wario came from, which is mostly down-hill. Wildflower Fields is the only level in the game to feature an interactable flower object. This level's CD is called Things That Never Change and once collected, it can be played in the Sound Room.

The time given to escape the level after hitting the switch varies between game modes.