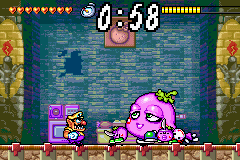 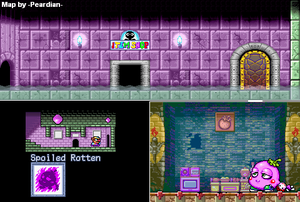 Spoiled Rotten is the first boss of Wario Land 4 that guards the Entry Passage.

Spoiled Rotten resembles a large round eggplant creature. It has youthful facial features with a sleepy expression, wears sneakers and carries a doll. The arena appears to be some kind of kitchen, with an oven and well-stocked shelves of food.

Wario faces it straight after the first level, the Hall of Hieroglyphs. Spoiled Rotten is accompanied by two Eggplant Warriors that Wario must defeat. To attack Spoiled Rotten, Wario can simply hit it by ramming its body. After hitting the creature seven times, Spoiled Rotten's appearance turns savage, with large, veinous eyes and a wide mouth filled with fangs. In this state, Wario cannot hit it from the front, as this will cause damage to him. Instead, Wario must jump over the boss and hit it in the back. Once it is defeated, Wario can access any of the four main Passages.

Unlike the rest of the game's bosses, Spoiled Rotten cannot be fought again after beating the game.

The time given to defeat the boss varies on the game mode.