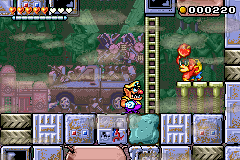 A Ringosukī throwing an apple at Wario

Ringosukī is an ape-like enemy found in the game Wario Land 4. It has red fur and wears sunglasses, a pair of jeans and a backpack. It walks back and forth on a platform, changing direction towards Wario if he draws near, and starts throwing apples at him from its backpack. If Wario eats one of the apples, he transforms into Fat Wario.

If a Ringosukī tries to throw an apple when Wario is already fat, the enemy eats it instead. Ringosukī can be flipped over and stunned for a short time by jumping on them, pushing them against a wall, throwing an enemy or object at them or hitting them from below. They can be defeated with any attack and do not produce any coins when defeated. They are considered "heavy" enemies and if thrown at lighter enemies, they will defeat them while the Ringosukī will remain. If thrown against heavier enemies, both that enemy and the Ringosukī are defeated.