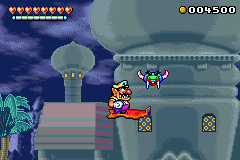 Wario riding past a Mayubird

Mayubirds[1] are enemies that appear in Wario Land 4. They mainly appear in the level Arabian Night, and are usually found in large groups. They are blue-colored birds with a big green nose showing two big nostrils, a big red lip in their mouth, showing two sharp fangs, and bushy, black eyebrows. Mayubirds also have white and pink wings.

Mayubirds move back and forth in the air, always in the same area. If they are attacked from below, Wario will take damage, because of the sharp fangs. They can be defeated by a ground pound from above, or a body slam on the side. However, if Wario touches a Mayubird without taking damage (touching it from above or the side), and without using an attack, the Mayubird will fly away.