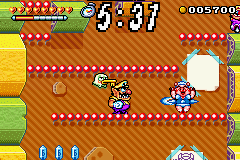 A Deburīna that has emerged from a picture in Doodle Woods.

Deburīna is one of the many enemies in Wario Land 4, depicted as dancing, female ballerina pigs. They only appear in the level Doodle Woods, where drawings of them hang on the walls. Some of these drawings come to life when Wario either gets near them or walks under them. Deburīna will slowly dance towards Wario, intending to hit him with the spiky tutu. As such, Deburīna cannot be attacked from the side while dancing; instead, Wario can only defeat them with a Ground Pound on the head.

If the player lands on a Deburīna's head without doing a Ground Pound, it will fall to the ground, drop the hoop and cry, becoming completely defenseless and no longer immune to side attacks. However, if Wario leaves it alone for a while, it will soon get back up and start dancing again.

Deburīna also makes an appearance in Super Mario-kun from one of Hoggus's drawings. Wario gets sickened from seeing it and eventually vomits on it.