A mine[1] is an enemy in the Game Boy Advance game Wario Land 4. They take the form of floating, spike-colored balls with one eye and a tongue sticking out. They only appear in the boss battle against Catbat in the Sapphire Passage. Two or three of them are exhaled from Catbat's mouth every time Wario deals damage. 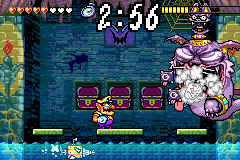 During the first part of the battle, the mines are purple. If Wario is to touch one, he will transform into Puffy Wario, which is of no use to the player and will merely waste valuable time. When Catbat's health gets lower as the battle goes on, it will send out red mine instead of purple ones. These will harm Wario instead of transforming him.

The mines trace a wavy path of movement through the air, and will continue in the direction of Catbat's exhale until they leave the screen. They cannot be truly defeated, but they will disappear immediately when Wario touches them.