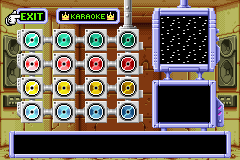 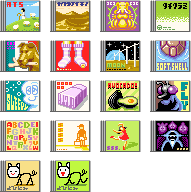 The eighteen different album covers, including the two Karaoke covers.

The Sound Room is a location in Wario Land 4. It is a place that Wario stores the CDs that he collects, with one found in almost every level. Each one has a unique album cover and tune that be played. Inside the Sound Room are two speakers on the wall, along with two television screens; one that shows the album cover for the CD the player is listening to, and the other one shows a music video featuring "Wario impersonators"[1], a dog, an apple, a fox mask, a raccoon, and many other pictures.

Different colored CDs are stored in different rows. The first being green (retrieved from the Emerald Passage), red (Ruby Passage), yellow (Topaz Passage) and blue (Sapphire Passage). A seventeenth CD, the Karaoke, can be unlocked by getting 10,000 or more points in every level, including Hall of Hieroglyphs and Golden Passage (even though there are no CDs to collect in those levels). It is a full song featuring a female singing in Japanese.