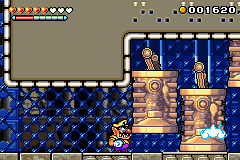 Wario, standing near some pistons in Wario Land 4

A piston[1][2] is a machine that first appears in Yoshi's Story. In the Mecha Castle, pistons appear in pairs and try to crush an unsuspecting Yoshi passing between. If a Yoshi is crushed, he is defeated instantly and lost as a result. Even the Super Happy form cannot protect the Yoshi from this hazard.

A different-looking type of piston[3][4] appears in Wario Land 4. If a piston squishes Wario, it transforms him into Flat Wario, allowing him to crawl into small spaces. Pistons do not harm Wario or any enemy in any sort of way. These objects mainly appear in factory levels (such as The Curious Factory) and some pink areas. There is always a Decompressor or a body of water that returns Wario to his normal size and shape.