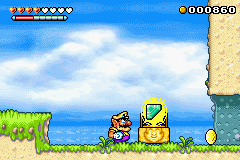 A Gold Coin from a jewel piece box

Coins are items found in Wario Land 4. They can be obtained in a number of ways, such as by defeating enemies, destroying blocks, and opening boxes. Four different kinds of coins can be found in the game. Gold Coins[1] are found in jewel piece boxes, Full Health Item boxes, and CD boxes. In Pinball Zone, Gold Coins can also be obtained when pinball digital counters are cleared. Additionally, the large sunflower in Wildflower Fields drops Gold Coins when enemies are thrown at its center, and this can be done up to a total of four times.[2] Silver Coins[1] can be obtained by defeating powerful enemies. If Wario hits the buttons in Domino Row before the dominoes do, he will be rewarded with a Silver Coin. Additionally, if both Wario's Heart Meter and Heart Gauge are filled, then enemies that would normally drop little hearts when defeated will drop Silver Coins instead. Other, less valuable coins (such as the Bronze Coin[1] and Small Coin[1]) can be obtained by defeating minor enemies and breaking blocks. Bronze Coins can be obtained when Chomp balls are thrown into pinball tulips in Pinball Zone. Coins can also be obtained from flowers found in Wildflower Fields, and the number of coins that are dropped depends on how long Wario waits after the flowers have been pollinated by Beezleys. Blue Crystals[1] and Red Crystals[1] differ from regular coins in that they are found floating in the air, and they do not disappear after a short time. The most valuable source of points in the game is Diamonds, which are worth 1,000 points. They are uncommon items found in all levels, and they are usually the main prize found in pink areas.

All coins collected are put to the side after the player completes a level, and any additional hearts Wario has are converted to coins at 50 points per heart, the same number as a Bronze Coin. These coins can then be spent later in the Mini-Game Shop, where Wario can play one of three minigames. If he gets a certain score in any minigame, he will be awarded a medal, which can be used to purchase items from the Item Shop to assist him in defeating a boss.

The types of coins found in the game are: