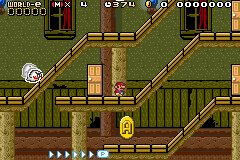 The first Advance Coin in the level Doors o' Plenty

Advance Coins,[1][2] also known as Ace Coins[3] or A-Coins,[3] are special coins that appear exclusively in Super Mario Advance 4: Super Mario Bros. 3. They appear only in the new World-e levels. They are similar to Ace Coins in appearance, except yellow instead of red. Unlike Ace Coins, they spin before being collected.

If the player accumulates enough Advance Coins, they can enter any of three special World-e Toad Houses, where they can play an exclusive mini-game. The player must collect 30 Advance Coins to access the Blue Mushroom House, 50 for the Red Mushroom House, and 80 for the Orange Mushroom House. Because a limited number of levels was released outside Japan, players using a non-Japanese version of the game can collect a maximum of only 49 Advance Coins and are therefore unable to enter the final two Toad Houses. However, the Virtual Console versions of the game released on the Wii U make all World-e levels available by default, avoiding this problem.