The Orange Switch is an e-Reader card for use with Super Mario Advance 4: Super Mario Bros. 3. It was included in the Series 1 set of cards. Although technically a Power-Up card, the Orange Switch is labeled as a "Game Level/New Level" card. It can be used in both the main game and in World-e. The Japanese version of the card's key art is colored orange and features a red outline of Raccoon Mario, specifically him flying.[1]

Once the card is scanned, any non-boss enemies that Fire Mario defeats with a fireball will turn into a coin, much like in Super Mario World. Compared to the effects of the other switches from Super Mario Advance 4: Super Mario Bros. 3, the effect of the Orange Switch is quite minor. 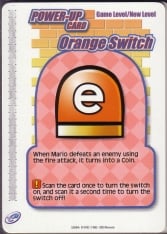 Enemies turn into coins with a fireball!