This article is about the fake Bowsers from Super Mario Bros.. For other uses, see Fake Bowser (disambiguation).

A fake Bowser (also called Bowser Impostor or Bowser's decoy) is a standard enemy that was transformed by Bowser's black magic into a duplicate of himself. They first appear in Super Mario Bros.

The concept of fake Bowsers came about during development of Super Mario Bros.. Since all enemies have their sprites flipped upside-down when they are defeated (except for Piranha Plants, which simply disappear, and Bullet Bills, which stay rightside up), one of the programmers accidentally inserted an upside-down Koopa Troopa shell when portraying Bowser's death animation as if he were defeated with fireballs. The developers liked this idea, and as a result, this idea was extended to most of the Bowser battles in the game.[1][better source needed] 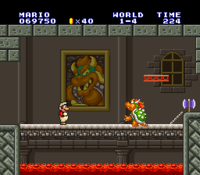 In Super Mario Bros., the seven fake Bowsers are placed in each castle, with Bowser's Castle containing the real one. Defeating a fake Bowser with five fireballs reveals that they are really just common enemies disguised as Bowser. The enemies and their abilities are the following:

The "You VS. Boo" challenge of Super Mario Bros. Deluxe: 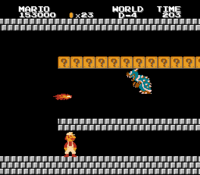 In Super Mario Run, fake Bowsers appear at the end of the fortress levels in Worlds 1, 3 and 5. They are a Goomba, a green Koopa Troopa, and a Buzzy Beetle, respectively.