The Family Computer Disk System (also called the Famicom Disk System) is an accessory for the Family Computer. It allowed the Family Computer to play certain games on a proprietary floppy disk format called "Disk Cards" rather than ROM cartridges. Disk Cards had the advantages of being cheaper and allowing for higher data capacity than cartridges at the time. Besides that, the disks were rewritable, making saving easier. Nintendo sought to make Disk Cards a permanent standard for all of their future games at that point, though this plan was abandoned a few years later, due to various issues. Sharp Corporation, a Japanese electronics manufacturer, created the Twin Famicom, a Family Computer combined with the Disk System into one piece of hardware, but it was also only released in Japan. The main reason why Family Computer Disk System was not released outside Japan and why it eventually lost developer support altogether is believed to be due to a lack of success caused by various issues with the system:[1]

The piracy issue was an especially big problem for Nintendo, and is believed to be the source of their stringent policies regarding copyright protection. It is also widely believed that the Disk System's high piracy rate is what convinced Nintendo to use cartridges for the Nintendo 64 rather than the technologically superior optical discs seen in their rivals, the Sega Saturn and Sony PlayStation.

In 1986, Nintendo sought to counter Disk System piracy by installing special Disk Writer kiosks that would allow consumers to download games onto Disk Cards for ¥500 as opposed to the retail price of ¥2,600; some Disk System games were even exclusive to these kiosks. The service was very popular, remaining in place until the Family Computer line's discontinuation in 2003, 9 years after the discontinuation of the Disk System itself. Excluding prize disks, FDS games were available through retail, Disk Writer, or both. Kaettekita Mario Bros. and the FDS ports for Donkey Kong, Donkey Kong Jr., Pinball, and Wrecking Crew could be purchased only through the Disk Writer. The former was priced at ¥400 because of its promotional nature, making it the cheapest FDS game. I am a teacher: Super Mario Sweater was a retail-only game, but it was sold in handicraft stores. All Night Nippon: Super Mario Bros. was sold through a mail order lottery system and at Nippon Broadcasting System's building on a single day. The Disk Writer was also capable of updating software for any game that needed it, the sole exception being Family Computer Golf: Japan Course, which required mailing the disk to Nintendo.

For the most part, FDS games are identical to their Famicom or NES cartridge versions. Here are some differences found in Mario games:[2]

Six games received blue disks, five were made by Nintendo and were compatible with Disk Fax, four of which are Mario games. All compatible blue disk games were subject of tournaments with scores submitted through the Disk Fax, a device that could send contestants' data and high scores to Nintendo. The tournament began as soon as the blue disks were released.

The three gold disks and Wakusei Aton Gaiden are the only FDS games that were never available through retail.[3] No gold or blue disk games have a cartridge equivalent and were distributed only in Japan. 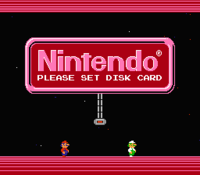 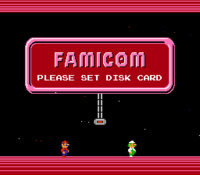