The Satellaview (サテラビュー Saterabyū) was a satellite modem add-on for Nintendo's Super Famicom system in Japan released in 1995. It retailed for ¥14,000 (about USD$144.29).

It was made in a joint effort between Nintendo and St.GIGA, the latter at the time being a popular satellite radio company. Contrary to popular belief on the internet[1], Bandai had no involvement with the hardware or servers and is known to have used them only to supply expansion data for their SD Gundam G-NEXT Game[citation needed].

The Satellaview had features relatively comparable to Sega's Sega Channel service in North America - its most notable feature was the ability to download games, news magazines and articles from St.GIGA's servers. A feature that was highly important, but has not been nearly as well documented, was its ability to stream Satellite Radio. At times this was used to play pop music, advertise, or allow people to listen to radio programs while playing games - for certain special games, particularly the games advertised as Soundlink, of which many of the Mario games showcased on it were, audio was played intentionally to go along with the gameplay and consisted of character voice acting and arranged game music. The service was discontinued on June 30, 2000.

These are Mario games released on the Satellaview. Not much information is available, and what there is is sometimes hard to verify, but reputable sites have mentioned these games. 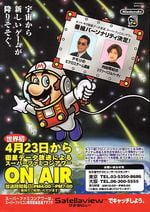 A Japanese flyer for the Satellaview, featuring Mario

There are also games that are St. Giga-themed in which Mario characters have cameos and/or major roles:

There are also various magazine releases which have articles featuring Mario characters. A promotional flyer for the Satellaview features Mario in a spacesuit, which would later appear as an add-on outfit in the Nintendo Switch game Super Mario Odyssey on March 28, 2018, and in Mario Kart Tour as a separate playable variant that first appeared in the Space Tour, aptly going by the name of Mario (Satellaview).

Satellaview coverage on other NIWA wikis: