It has been suggested that this page be moved to Lily Franky Theater. (discuss) 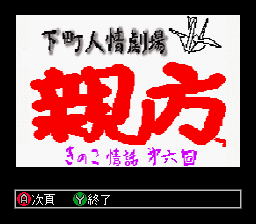 This "virtual magazine" is a slideshow that has three options.

progresses to the next slide while

goes back to the previous slide.

exits from the slideshow.

The broadcast starts as, in a dark forest, Mario orders Toad to kill a person with a butter knife. The person escapes and Mario chastizes Toad. The victim, revealed to be Bowser, meets a police officer to report the crime. The officer finds an item that Toad dropped (the Satellaview's BS-X cartridge) and Bowser speculates that it may indicate the killer is a fashion model, although the policeman is unconvinced. Bowser then finds the butter knife and speculates that the culprit may be a performer, but the police officer is again unsure. The broadcast ends here.

In this broadcast, Mario and a 15-year-old Toad are in jail for a stay of about 20 years. Toad is nervous about staying for 20 years since this will cause them to be 35 by their 2015 release. Mario decides to break out of prison and pulls a spoon out of his rear end, which smells like feces. The floor is made of concrete, so Mario tells Toad to dig with his hands. The recorded broadcast ends here, but the plot is continued in the next broadcast.

The radio hosts during the intro also announce the release of Romancing SaGa 3.

This broadcast was a sequel to the November 10, 1995 broadcast. Mario pulls a drill from his scrotum, and breaks through the concrete with the drill. Toad gets worried because they are taking a long time to dig outside of jail. Mario explains that he will keep digging until they reach daylight. As they eventually make it outside of the jail, they find out they have ended up in Brazil. Toad is worried because he does not know anything about Brazil, but Mario is happy to relax there. The recorded broadcast ends here.

“Indeed, I am the richest person in the world, Bill Gates!”
—Bill Gates, Shitamachi Ninjō Gekijō

In this broadcast, Mario and Toad are having an argument over who should be first to ride the Windows 95 (which they believe to be a vehicle). Bill Gates then makes an entrance. Toad says that Bill Gates is a "beer company poster girl" (a pun on the very similar writing of "beer" and "bill" in Japanese writing), but Gates informs Toad that he is wrong. Mario then recognizes the man to be Bill Gates and he and Toad ask him for money. Bill Gates stares at them blankly, but then informs them that the Windows 95 is not a vehicle, but something to put on your head. Mario and Toad insult him, telling him he is an idiot. The broadcast ends here.

This broadcast was entirely hand drawn, in a vague, abstract style. It stars a man, which, based on his appearance, is presumably supposed to be Shitamachi Ninjō Gekijō. The man picks up a game controller, and starts controlling Mario. Then the man travels to the depths of Hell abruptly. Finally, the man has sex with a lobster. The broadcast ends here.

The release date of this broadcast is unknown.

The broadcast starts with a backstory:

In a low-lying part of a heartwarming city, Mario works as a plumber.
One day, an employee from another shop announces they have been made Mario's wife.
Due to the shock of the townspeople, Mario hides himself away from public.

Princess Peach and Toad are sitting together, wondering where Mario went. Toad says he wonders where the boss is, and Peach exclaims that he is a good-for-nothing jerk. The next scene shows Toad convincing Peach to engage in oral sex, and Peach agrees. Mario suddenly appears, and Peach and Toad jump back in shock. Toad says to Mario that he was very worried about him, but in his rage, Mario jumps up and kills Toad, squishing him. Peach says, "Darling, give me a break already— my heart was yearning for you." Mario is still completely outraged, so he crouches, jumps up and kills Peach, leaving them both for dead. Mario then pulls out a cigarette, and says that he just got a new girlfriend. What appear to be the ghosts of Peach and Toad fly in, exclaiming they are very surprised. Mario's new girlfriend is revealed to be Bowser. Toad and Peach are very shocked at this. The broadcast ends here.