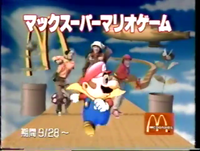 McDonald's Japan commercial on this promotion

The Super Mario Bros. Watch[1] is a line of LCD game watches released in 1990. They are McDonald's promotional items that received limited distribution and were not available for regular retail. As such, the packaging lacks barcodes, MSRP prices, and holes for pegboard hooks. The watches were distributed by Simon Marketing, a defunct firm that received most of its business from McDonald's and handled that restaurant chain's promotions such as Happy Meal toys. For the upcoming release of Super Mario World, McDonald's Japan held a promotion that started on September 28, 1990. For every 500 yen spent, customers would receive a scratch card that can win one of these game watches, a Big Mac, Famicom cartridges of Super Mario Bros. or Super Mario Bros. 3, or a copy of Super Mario World (the Super Famicom did not have a pack-in game).[2][3][4]

The watches were manufactured by S.I.U. based in Torrance, California, but actual production occurred in China. They are of cruder construction compared to the Nelsonic Game Watch and Gamewatch Boy. Both the Japanese and American packaging show that they were licensed from Nintendo of America.