“The 64DD sat under your N64. Well, not yours — you didn't have a 64DD.”
—British Official Nintendo Magazine 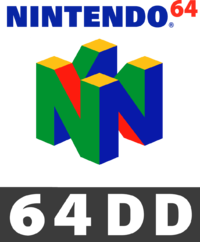 The Nintendo 64DD (short for 64 Dynamic Drive)[2] was a disk drive unit that, like the Family Computer Disk System, attached to a Nintendo 64 and could play games in a magnetic disk format, with the disks containing their own internal memory written through the N64 instead of the disk itself. There were also several peripherals used for it.

While originally planned to release concurrently with the base Nintendo 64, the system was ultimately released in Japan in December 1999, following numerous developmental delays. It was scheduled for release in North America in 2000, but it ended up being a commercial failure both due to its belated Japanese release and due to the way it was sold (mainly through subscription to the Randnet online service, with little to no retail units in stores); consequently, the planned American release was cancelled, leaving the add-on exclusive to Japan. A remnant of this eventually resurfaced on July 15, 2016, when YouTuber MetalJesusRocks (Jason Lindsey) posted a video showcasing a then-recently-discovered prototype for an American 64DD with an included developer's disk, both of which were verified as legitimate by former Nintendo of America employee Mark DeLoura.[3] On September 2, 2016, MetalJesusRocks did a follow up on his American 64DD with YouTuber Hard4Games (Tony Visintainer).[4][5]

This article's name is conjectural for a part of its content. If an official name is found for the currently unnamed portion of content, it may need to be split into a new article. 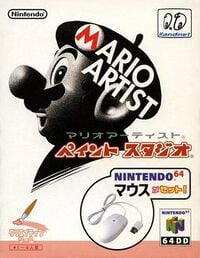 NUS-017, this replaced analog stick input to allow more precise cursor movements in games that supported it, such as the Mario Artist series.

NUS-029, this allowed the Nintendo 64 connect to Randnet. Mario Artist: Communication Kit made use of this accessory directly. 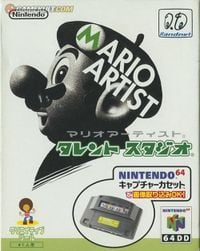 NUS-028, this allowed the Nintendo 64 to take in RCA and microphone as input. Mario Artist: Talent Studio made use of this accessory.