“If you were to strike up a friendship with a Japanese gamer and happened to ask him whether he owned a NES back in the '80s, you'd probably be met with a blank stare.”
—British Official Nintendo Magazine

The Family Computer (often shortened to Famicom) is the Japanese equivalent of the Nintendo Entertainment System, or the NES. The Family Computer's controllers were attached to the main unit, unlike the NES, and could be stored on the sides of the system. Player One's controller can pause the game, and Player Two's controller has audio controls. The cartridges were half the size of the NES's, and were inserted in the top instead of through a door in the front (like on the NES). Instead of looking like a vertical cartridge, like the NES, it more closely resembles a SNES cartridge, but can be found in different colors, such as gray, yellow, and blue.

Sharp Corporation has a long history of working with Nintendo. A few months after the July 1983 release of the Famicom, Sharp produced the Sharp C1 Famicom TV, a combined console and TV unit. The following year, Sharp released the Playbox BASIC and Family BASIC accessories. They allowed users to program in BASIC on their Family Computers. In February 1986, Family Computer Disk System accessory was released which enabled games to be played on the Family Computer in the form of a disk. Many newer games were released only on the Disk System that were never released on the NES or Family Computer. A few months later, Sharp released the Twin Famicom, which combined the base console with the Disk System add-on in one piece of hardware. In 1987, the Famicom 3D System accessory was released but like the future Virtual Boy, it flopped. This too had a Sharp version for the Twin Famicom. In 1989, Sharp released the Famicom Titler which combined the console with a video editor.

In the first two calendar years, Nintendo sold only 440,000 Famicom units. Thanks to the release of Super Mario Bros., Nintendo sold 4 million units in 1985.[1] 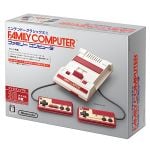 The packaging of the Nintendo Classic Mini.