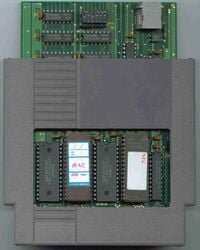 A cartridge used at the 1991 Nintendo Campus Challenge

Nintendo Campus Challenge is a special cartridge used in the events of the same name. There are two different cartridges produced for each event: a Nintendo Entertainment System version for the 1990 competition and a Super Nintendo Entertainment System cartridge for the 1992 competition. The cartridge is considered to be even rarer than the Nintendo World Championships cartridge with only one known to exist. It was sold on eBay for $20,100[1] and is currently owned by a private collector.

The NES game was used in the 1991 Nintendo Campus Challenge that toured fifty cities. The top prize was an all-expense trip to Florida for the next tournament, which took place in 1992. 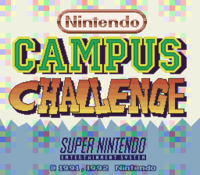 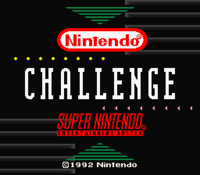 The first place winner at each university received a Super Nintendo Entertainment System and full retail copies of the three games included in the challenge, while Second, third, and fourth place winners got $100, $75, and $50, respectively. The grand prize winner received $10,000.