“Climb up the vine and land in the clouds!”
—Pauline, Super Mario Odyssey

Coin Heavens[1][2][3] are bonus areas found in most Super Mario games. In each of its appearances, Coin Heaven is secretly located in the sky in several levels, accessed through a hidden item or secret path. It is loaded with coins, which the player may or may not have the ability to completely collect, and generally puts the player back into the main level after completion. 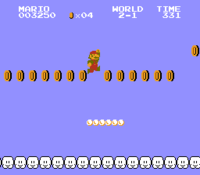 Mario in the Bonus Stage in Super Mario Bros.

In Super Mario Bros., the Bonus Stage[4][5] (also named the Sky Bonus[6] or Cloud Bonus[7]) can be accessed when the player hits a block that holds a beanstalk, which upon climbing up leads the player into the Cloud Block-filled area. The player then must ride along a moving cloud in order to reach all the coins before being dumped back onto the ground.

In the Super Mario Bros. Deluxe Challenge Mode, grabbing every coin in a Bonus Stage will earn the player a 10,000 point "Perfect Bonus". 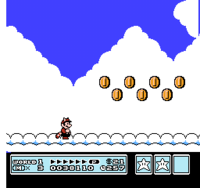 Coin Heaven is accessed differently in Super Mario Bros. 3. If the player finds an invisible Magic Note Block, the player can jump on it, sending them into Coin Heaven. In this version of Coin Heaven, the game will automatically side-scroll the player through and give them a chance to collect all the coins before reaching the pipe at the end, which will send them back to the ground. If the player is equipped with either the Super Leaf or the Tanooki Suit, they could fly upward in some Coin Heavens and find a Brick Block with a 1-Up Mushroom inside. However, since it's auto-scrolling, going to the left of the block can crush the player between it and the screen. The song used for Coin Heaven is also used for the sky portion of Sky Land as well as the Warp Zone. 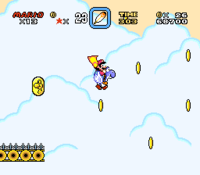 Mario and Blue Yoshi in a Coin Heaven in Super Mario World.

In Super Mario World, Coin Heaven is accessed in yet another way, namely by picking up Yoshi's Wings while riding a Yoshi. As in Super Mario Bros. 3, the area autoscrolls, though they do not have as many coins. However, they do have Dragon Coins to make up for it. A major difference with other games is that completing a Coin Heaven sequence is counted as having reached the level's regular exit, thus putting the player back at the World Map and unlocking the path to the next level. 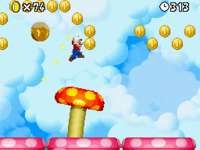 The New Super Mario Bros. series brings back beanstalks as the Coin Heaven access method. They vary wildly in layout this time, unlike in previous games. In New Super Mario Bros. 2, unlockable Rainbow Courses also appear for every world, should the last two digits of the timer match the world number upon clearing a course (with Worlds Mushroom, Flower, and Star treated as Worlds 7, 8, and 9, respectively). Star Coins are commonly found in Coin Heaven.

In Super Mario 3D Land, many courses contain Coin Heavens, which contain a Star Medal at the end. They can be accessed by jumping on a Super Note Block. The most common type scrolls sideways in a 2D fashion, with a single ? Block that contains a Super Star, which the player can use to defeat the five Biddybuds or Para-Biddybuds present and earn a 1-Up. The other type of Coin Heaven has many cloud platforms scrolling up and often starts out with coins arranged in the shape of "3D". An isometric camera view is used to trick players who do not turn on the Nintendo 3DS's 3D on.

Super Mario 3D World has Coin Heavens accessed via Cloud Cannons. They always have Green Stars at the end, like with Star Medals in Super Mario 3D Land, and they are always side-scrolling. These areas have eight enemies rather than five, and have either a ? Block with a Super Star or a Potted Piranha Plant that can be used to take out enemies. The Coin Heavens in Bowser's Fury are similar to those in the main game, but at the end, there are Cat Shines instead, which only appear after all enemies in the Coin Heaven are defeated.

Occasionally in the digital clock for Game & Watch: Super Mario Bros., Mario can find a vine that leads to the Coin Heaven from World 2-1.