Hisstocrat is a boss who appears in Super Mario 3D World and Super Mario 3D World + Bowser's Fury as the boss of World 3-B. He is a giant violet snake wearing regal attire, such as a crown and cape. He also appears with other, teal snakes. His name is a portmanteau of the words "hiss", a sound made by snakes, and "aristocrat", referring to his king outfit.

Mario and co. facing Hisstocrat and his minions.

Hisstocrat serves as the second boss of World 3. Hisstocrat has only two attacks: one is to emerge from the ground to send boulders landing on the player. The second attack is to send out snakes with plates for the players to jump on, which sometimes have Super Bells on them. Hisstocrat sometimes commands its minions to sink. When the plates are cracked, the snake will bite and damage players if they stand on it for too long. Occasionally, Hisstocrat will send a snake without a plate to attack, which is telegraphed by the snake's eyes emerging from the ground first before coming up. These snakes cannot be used as platforms, as they will simply bite the player if they attempt to stand on them. His only weak spot is the top of his head, where he has a large X-shaped bandage. The player must use the plates provided the other snakes as platforms in order to reach this weak point, although it is possible for Luigi and Rosalina to jump on Hisstocrat's head directly without the need of the plates by careful use of the Spin Jump. Players can also throw their allies on top of the head. After three hits, Hisstocrat is defeated, two large circles of coins appear, and the Warp Pipe to the Goal Pole as well as a Green Star are revealed.

A pink female version of Hisstocrat serves as the boss of World Bowser-B: Hisstocrat Returns, with her attacks being similar to that of the violet Hisstocrat, except she has fireballs instead of boulders raining down to the ground, and she also spits fire.

In World Flower-12: Boss Blitz, both Hisstocrats are fought at the same time. In this battle, both Hisstocrats have fireballs raining down, and when one Hisstocrat is hit, the other pauses and stares in shock, giving the player an opportunity to strike that one as well. Similar to their previous battles, their defeat will cause a Warp Box, coin circles, and a Green Star to appear. 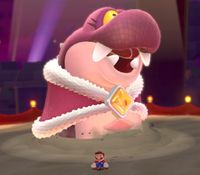 Hisstocrat appears to be a giant snake, extremely similar in appearance to a Cobrat from Super Mario Bros. 2, except bluish purple with a red diamond pattern on his chest. He has a rounded snout, similar to a somewhat flatter version of Yoshi. He wears a royal outfit with a blue, circular gem in the center. His head has two yellow eyes with slits for pupils, a white "X" on his head, and a golden crown just behind it. His mouth has four teeth and a rounded tongue with a small split in the middle. The female one is magenta, has visible eyelashes, its tiara is gray, and the "gem" is lozenge-shaped.

The male minions are a cyan color with a tan underbelly and a red plate, while the female ones are magenta with blue plates.