This article is about the tanks first appearing in Super Mario Bros. 3. For the enemies in Super Mario Odyssey sometimes generically referred to as "tanks" in the Prima guide, see Sherm. 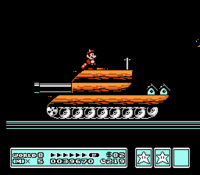 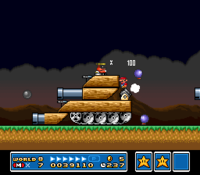 Tanks in the NES, SNES, and GBA versions of Super Mario Bros. 3

Tanks[1] are large, segmented, and heavily armed land vehicles utilized by Bowser and his armies in various games. They are usually equipped with various artillery, such as cannons, Rocket Engines, Bob-omb launchers, and Rocky Wrenches. In addition, some tanks were just mostly square in shape.

In New Super Mario Bros., the boss of World 6 is Monty Tank, which is depicted as a Monty Mole piloting a tank.

In Super Mario 3D World and its Nintendo Switch port, tanks appear in Bowser's Bullet Bill Brigade and Bowser's Bob-omb Brigade. In these levels, they slowly move around the levels, and Spike Traps are found on them. In this game, tanks have lights. The lights are activated only in the latter level, which takes place at night.

Tanks also appear in the The Adventures of Super Mario Bros. 3 episode "Princess Toadstool for President"; here, several tanks and Rocky Wrenches appear to attack Mario and Luigi when they enter Dark Land.