Anchors in Super Mario Bros. 3 are rare items that can only be received at a special White Mushroom House after collecting a certain number of coins in a certain level in the even-numbered worlds. An Anchor will prevent an Airship from moving if Mario fails to clear it, thereby eliminating the need to trek long distances to try again to complete the level. It also appears in cutscenes before Airship levels, where Mario climbs the chain while the Anchor is being hoisted up.

An anchor can be acquired in Double Trouble of the Nintendo Adventure Books series in either Mario Brothers Plumbing or a portion of the Doom Ship, and it can be used by Mario to reach the poop deck of the Doom Ship, where Roy Koopa is holding Luigi captive. An anchor can also be found in the subsequent book, Leaping Lizards, but it is a dud item; its only purpose is to drag Luigi down if he falls into a body of water, causing a Game Over.

There is also an anchor in Wario Land II that can be found in the SS Tea Cup world. It only appears in the fourth level of Chapter 2 called Drop the anchor!!. Here, Wario has to use his attack to move it and drop it into the water. After it is dropped, the level is completed.

Swinging anchors with Wario's emblem appear in the Wario Shipyard course as obstacles in the underwater section and the gliding section, where they block the player's path. They can be knocked back by touching them while under the effects of a Super Star or a Bullet Bill. 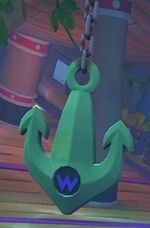 An anchor in Mario Kart Tour

Swinging anchors return as obstacles in the Mario Kart Tour rendition of 3DS Wario Shipyard and some of its variants. Drivers can push an anchor back (and receive bonus points in the process) either by hitting it with a Super Horn or a Super Bell, or by touching it while invincible or under the effects of a Mega Mushroom.

An anchor appears in Paper Mario: Color Splash as Mario's means of entering the Airship carrying the drained red paint from Crimson Tower, as Johnson neglected to lift up the anchor and thus forced the Airship to stall.

In Mario Tennis Aces, Boom Boom uses an anchor to lower himself onto the court in his entrance animation.