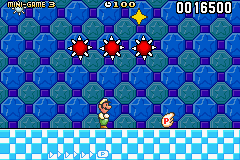 The Orange Mushroom House[1] is an orange-colored Toad House that contains one of the special minigames found in World-e in Super Mario Advance 4: Super Mario Bros. 3. The Toad House is unlocked after the player collects 80 Advance Coins. The player must pay 30 coins each time they play this minigame.

Mario or Luigi starts on the bottom floor with a P-Wing to his right. Afterwards, the player must avoid several spikes (red ones are stationary, while blue ones move) and sparks. If the player manages to reach the top, the player is awarded a random item. Any contact with spikes or sparks, however, has the player lose instantly.