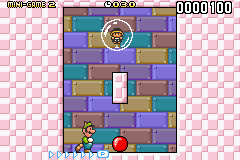 The Red Mushroom House[1] is a red-colored Toad House that contains one of the special minigames found in World-e in Super Mario Advance 4: Super Mario Bros. 3. The Toad House is unlocked after the player collects 50 Advance Coins. The player must pay 30 coins each time they play this minigame.

With a 30-second time limit, Mario or Luigi starts the minigame in a room where he has a red ball. The object is to throw the ball and make contact with a bubble hovering at the top of the screen. The ball turns yellow after being thrown once, turns blue after being thrown twice, and disappears after all three throws are used. During each throw, the ball is slower than before. It is possible for the ball to rebound and hit the bubble two or even three times in a single throw. If the ball hits the bubble three times, the player can get the contents of the bubble (a random item).