A Magic Ball,[1] also known as a Crystal,[2] "?" Ball,[3] or Orb,[4] is an item in Super Mario Bros. 3 and Super Mario World. It looks like a round power-up object with a question mark on it and is required to clear certain levels. It automatically activates when Mario or Luigi touches it. 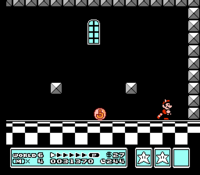 The upside down Magic Ball in Super Mario Bros. 3

Magic Balls first appear in Super Mario Bros. 3. They appear only in fortresses after the player defeats Boom Boom. Upon his defeat, Boom Boom drops a Magic Ball, and Mario must touch it to destroy the fortress and therefore complete the level. If Invincible Mario defeats Boom Boom by touching him, the Magic Ball will appear upside down, in the center of the arena. Magic Balls later appeared in the game's reissues, playing the same role.

A Magic Ball reappears in Super Mario World in the Sunken Ghost Ship. Touching it beats the level in a similar fashion to beating a boss, although it is left out in the open instead of being held by a mini-boss. There is also a glitch to receive a Magic Ball and use it in any level to instantly complete it.

Magic Balls also appear in the Modern version of Parachute in Game & Watch Gallery 2. If the player has any misses at 200, 500, or 700 points, three Magic Balls will come out of the flying ship. They all disappear to reveal a 1 UP Heart for removing a miss in one of them. 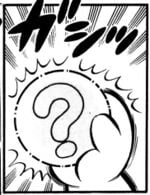 In volume 4 of Super Mario-kun, whose arc is based on Super Mario World, Mario grabs the Magic Ball to exit the level, and he and his friends are later found on the top of the entrance to the Valley of Bowser.