"Tiki" redirects here. For information about the character from the Fire Emblem series who appears as an Assist Trophy in Super Smash Bros. Ultimate, see Assist Trophy § Tiki.

“Tell those Tikis to keep it down! I'm an old ape, and I need my rest.”
—Cranky Kong, Donkey Kong Country Returns

The Tiki Tak Tribe is an organization of wooden creatures called Tikis, who appear as the main antagonists in Donkey Kong Country Returns and its 3DS port Donkey Kong Country Returns 3D. The tribe is led by Tiki Tong, a huge tiki resembling a drum with a crown. Similar to the Kremling Krew from previous Donkey Kong Country installments, there are higher and lower-ranked members of the Tiki Tak Tribe. The higher-rank members are capable of hypnotizing other characters, such as other animals and a boss in each world. The lower-rank members make up the recurring enemies throughout the levels. The Tiki Tak Tribe has a wooden mask for their emblem, as shown on the Snippys' ship's sails and their flags, bicorne, and image gallery icon.

Both the higher and lower-rank tikis resemble a musical instrument; all of the lower-ranked ones resemble a drum. The particular instrument that a higher ranked tiki resembles is played in the background music of the associated boss fight.

Traditionally, Tikis are associated with Polynesian culture, though the Tiki Tak Tribe seems to draw more influence from African tribal culture instead, which is evident by the patterns and vibrant colors each Tiki has.

In the opening cutscene of Donkey Kong Country Returns and Donkey Kong Country Returns 3D, when the giant Tiki Tong Tower rises out from the volcano of Donkey Kong Island, it erupts and the tikis emerge from the rocks blasted out of the volcano. Moments later, the seven high-ranked tikis hypnotize the animal inhabitants and control them to steal the banana hoard supply. One of the commanders named Kalimba goes into DK's Tree House and unsuccessfully tries to hypnotize Donkey Kong. Donkey Kong punches Kalimba out of his house and begins his quest to reclaim his bananas and save the island from the new threat.

At the end of every world, Donkey Kong and Diddy Kong go up against a higher-ranked tiki, who hypnotize a boss to fight both of them. For example, in the Cave world, the tiki commander Banjo Bottom employed Mole Miners to transport the stolen bananas and possessed their leader Mole Miner Max. In the Factory world, it is revealed that the bananas are being used to mass-produce tikis. After the Kongs defeat each boss, each tiki dizzily re-emerges from the unconscious boss. Donkey Kong can go up to the tiki and punch it repeatedly to send it flying away or simply let it escape after it recovers.

After a long journey, Donkey Kong and Diddy Kong reach the end of the eighth world, Volcano, where they bump into all seven high-ranked tikis again and the Tiki Tak Tribe's leader, Tiki Tong. Using the last of the banana hoard supply, Tiki Tong turns it into banana juice and spews it over his lieutenants. This transforms them into a large pair of hands, which Tiki Tong uses during the final battle against the Kongs.

The Kongs manage to defeat Tiki Tong, who explodes, launching them into space. However, Donkey Kong uses his entire strength to knock the moon out of its orbit and land it on the tribe's base (if the player is playing as Diddy Kong, he instead futilely tries to flee the gravitational pull of the moon only to bump his head on it, accidentally knocking it out of orbit and doing the above in the process). The moon's pressure pushes it back down into the volcano, which destroys it, releases the stolen bananas and sends the moon flying back into orbit. As the bananas rain from the sky, the animals are freed from their hypnosis. With their leader and his lieutenants defeated, the Tiki Tak Tribe's reign over the island is over, marking the end of the Kongs' adventure.

In Super Smash Bros. for Nintendo 3DS, Tiki Buzzes appear as enemies in Smash Run. In addition, a Tiki Buzz, as well as Kalimba, appear as trophies.

In Super Smash Bros. for Wii U, Screaming Pillars appear as stage hazards in Jungle Hijinxs. In addition, Krazy Kalimba and Tiki Tong appear as trophies, both of which can be purchased at the Trophy Shop.

In Super Smash Bros. Ultimate, the nine high-ranking members of the Tiki Tak Tribe (excluding Tiki Tong) appear collectively as a Novice-class Neutral-type primary spirit with three support slots. When used, the spirit grants weakness to fire and explosion attacks. In World of Light, it is found on the Light Realm map; its puppet fighters are four differently-colored Diddy Kongs on the Kongo Falls stage.

A tiki mask resembling Kalimba on a Strong Greenie's spear

In Treacherous Mansion of Luigi's Mansion: Dark Moon, Strong Greenies wield spears with a tiki mask resembling Kalimba on them, and regular Greenies can appear with them in ScareScraper.

Screaming Pillars are notable for appearing separately from the rest of their tribe in several games, such as Donkey Kong Country: Tropical Freeze, Mario Golf: World Tour, Super Smash Bros. for Wii U and in the December 12, 2018 update of Mario Kart Arcade GP DX. They also appear alongside Tiki Goons in the Mario Kart series course, DK Jungle. 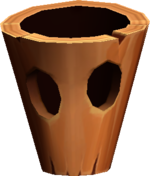 Most of the Tiki Tak Tribe resemble floating wooden tiki masks, and many are adorned with colored feathers. However, they come in a variety of colors and shapes, such as the Tiki Goons that resemble bongo drums or drums and Tiki Buzzes that resemble birds with wooden wings to their sides. The main servants of Tiki Tong have a pair of skinny, twig-like arms.

The Tikis have a variety of abilities. The higher ranked members are agile, have the ability to float in midair, and can hypnotize other creatures. Their hypnosis does not work on all characters, as Donkey Kong and Diddy Kong are mysteriously unaffected by it. The lower rank members have more distinctive traits from each other. For instance, the Tiki Buzzes can fly, Flaming Tiki Buzzes and Tiki Torches can produce fire (even though they are made up of wood), and Tiki Tanks wear a steel helmet to protect them from direct attacks.

The Tikis use bananas as their primary source of power. In the Factory world, it is shown that a Tiki can come to life when a mashed-up banana is incorporated into its body. This is further demonstrated in the final battle against Tiki Tong, where he spits juice on the seven high-ranked tikis to turn them into his own pair of hands.