It has been requested that more images be uploaded for this article. Remove this notice only after the additional image(s) have been added. Specifics: Remaining K-O-N-G Letters and Puzzle Pieces

Similar to Mole Patrol, Crowded Cavern takes place in a cavern where Donkey Kong and Diddy Kong ride a Rocket Barrel throughout the level, having to move between large rocks and boulders. The main and only enemies in the level are a large group of Squeeklys, who attempt to fly into the Kongs. The group includes small Squeeklys that fly at the Kongs, medium-sized Squeeklys that move up or down when approached, and a Big Squeekly that blasts large sound waves from its mouth. The Kongs cannot defeat the Squeeklys while riding the Rocket Barrel and must avoid every one instead. There are seven Banana Coins in the level.

The level begins on a flat pathway leading to some wooden platforms that the Kongs must use to climb up to a higher area. Donkey Kong and Diddy Kong must walk on a rickety, wooden bridge which breaks shortly after they go on it. When it crumbles, the Kongs (as well as an unused minecart and numerous bananas) fall down to a lower area. They must continue right and jump from a few platforms, where Squeeklys are sleeping in the background. The Kongs then come across a Rocket Barrel, and when the Kongs start it, they wake the Squeeklys, who start to chase the Kongs through a wide passage in the cave. Some small Squeeklies attempt to attack Donkey Kong and Diddy Kong by flying horizontally in front of the Rocket Barrel and then attempting to chomp into the Kongs. This continues until the Kongs reach a narrow area with a trail of bananas and Banana Bunches. The trail curves in a V shape above a tall rock structure and ends with the letter K of the K-O-N-G Letters. At that point, the primates ride over some more boulders as a Big Squeekly begins to chase them. The creature heads into the background as they head past a large waterfall and peeks through a hole in the wall as the Kongs approach the letter O. Many bananas and Banana Bunches are in front of the waterfall. At the end of the group of bananas on the bottom row is the letter O, and a Banana Coin is also located just before that above a rock. Soon after this is the Tutorial Pig, who waits on a large platform at the checkpoint.

In the area farther ahead, medium-sized, chubby Squeeklys attack the Kongs by trying to fly in front of them while moving up or down vertically. At the same time, smaller Squeeklys return to try and swoop into the Kongs. Eventually, Donkey Kong and Diddy Kong fly over some wooden boards. Underneath the boards is the Big Squeekly who tries smashing through them while sticking its head out of the ground, snapping its jaws. As soon as the Kongs avoid the Big Squeekly, it pops from the wooden boards in the ceiling. There are some rock obstacles farther ahead. The Big Squeekly starts to chase the Kongs, and just before it can reach them, the Kongs fly through a narrow passage, and the Big Squeekly is knocked back. In the passage, the Kongs can find many Banana Bunches and a few obstacles in their path. The Kongs can a large group of collectibles on the other side of the passage. The Tutorial Pig and the next checkpoint are just ahead. 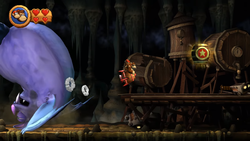 Big Squeekly gets defeated just before the Slot Machine Barrel

After the checkpoint, the primates enter a slightly narrower area, where there is a crane sticking out of the background, acting as an obstacle. Shortly after the Kongs dodge the crane and some rocks, the Big Squeekly returns to chase after them. The Big Squeekly starts shooting powerful sonic waves from its mouth. In their pursuit, Donkey Kong and Diddy Kong come up to some collectibles and the letter G. Eventually, the Big Squeekly shoots a more powerful sonic wave across the screen, destroying a large boulder and revealing a large group of crystals in its place. The Kongs must avoid the crystals, which the Big Squeekly accidentally crash into, causing it to fall unconsciously in defeat. The Rocket Barrel eventually drops off the Kongs at the end with the Slot Machine Barrel.