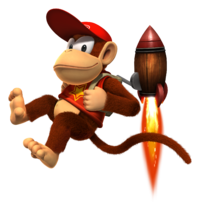 Artwork of Diddy with his Barrel Jet strapped onto his back, from Donkey Kong Country Returns

The Barrel Jet,[1] originally known as the Jetbarrel[2] and then the Rocketbarrel Pack,[3] is Diddy Kong's signature jetpack that he uses to travel around in the air. This object first appears in Donkey Kong 64. The Barrel Jet was constructed by Funky Kong.[citation needed]

The Barrel Jet usually has the appearance of a crate with a barrel attached on each side. The crate has a belt that straps around Diddy's waist while using it, and each barrel is connected to the crate from a black pole. Both barrels have an opening at the bottom for the flames to expel from.

In Donkey Kong Country Returns, the Barrel Jet was redesigned as a gray backpack, and the barrels on each side were changed into rockets. The rockets are darker brown than the barrels, but still appear to be made up of wood. The rockets have a red, metallic tip on the top and some red-colored fins on the bottom. 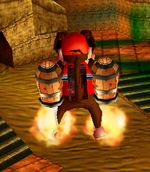 In its debut appearance, Donkey Kong 64, Diddy can use his Jetbarrel to fly around in the sky while using his Rocketbarrel Boost move. The move is fueled by Crystal Coconuts, as with the other Kong Barrel moves. If Diddy runs out of Crystal Coconuts, he can no longer take control of his Jetbarrel, and therefore falls back to the ground.

In Donkey Kong Country Returns, Diddy uses his Barrel Jet to horizontally hover in midair for up to few seconds, before falling back on the ground. The Barrel Jet is required for crossing large gaps that him and Donkey Kong cannot do by jumping themselves. Diddy can use the move while holding on to Donkey Kong, who takes control of the Barrel Jet. Diddy cannot travel as far with the Barrel Jet while riding on Rambi the Rhino, due to his weight. In 2-player mode, Diddy can move around independently, and has the ability to use the Barrel Jet by himself.

Diddy also uses his Barrel Jet in three cutscenes. The first cutscene where he uses the Barrel Jet is in Ruined Roost, just before battling Stu himself. After the Kongs fall through the ground, Diddy breaks his fall with his Barrel Jet. The second cutscene that the Barrel Jet appears in is Thugly's Highrise, the boss level with Thugly. Here, he also breaks his fall after him and Donkey Kong break through a rock wall. The third and final cutscene in which Diddy uses his Barrel Jet is after the final battle with Tiki Tong, where he uses it to save Donkey Kong at the last second as the latter falls from the sky.

The Barrel Jet reappears in Donkey Kong Country: Tropical Freeze where it serves the same purpose as in its predecessor.

During the Subspace Emissary of Super Smash Bros. Brawl, Diddy uses his Rocketbarrel Pack to propel himself onto the smash skiff, after Falco releases him from the Arwing. 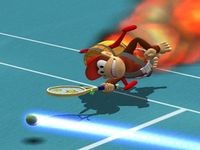 In the Japanese version of Super Smash Bros. Brawl, the Rocketbarrel Pack's other game appearance is labeled Mario Power Tennis rather than Donkey Kong: Barrel Blast.